A Night in the Dark 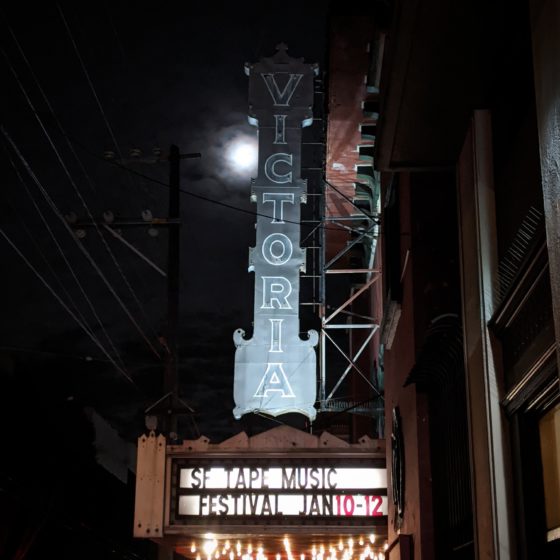 I spent two hours in the dark on Friday night listening to records with a hundred or so strangers. It was the first night of the 2020 installment of the San Francisco Tape Music Festival, held in the Victoria Theater in the Mission District. These weren’t records in the traditional sense of the word. They were multi-channel works (“fixed media,” in the curatorial parlance) taking advantage of the 24-speaker sound system installed for the series’ three evenings. And while the recordings were fixed, they weren’t entirely predetermined. For each, either its composer or a festival staff member handled the mixing board, and some of the installments involved more manipulation than others.

Highlights included Maggi Payne’s “Heat Shield” (white noise pushed to the breaking point in the pursuit of interstellar sounds), which she had performed live at the San Francisco Electronic Music Festival at the end of last year, as well as Matthew Barnard’s “Wache,” built from field recordings made around London.

Not all the works were contemporary. Reaching back to the origins of the consideration of the recording studio as an instrument unto itself, we heard Pierre Schaeffer’s “Étude aux casseroles [Pathétique],” composed on turntables back in 1948, and “Poem of Change” (1992) by Pauline Oliveros. Oliveros, active in the city’s experimental music scene starting in the late 1950s, co-founded the original San Francisco Tape Music Center in 1962. She died a little over three years ago, and it was quite moving to hear her voice, always larger than life, and all the more so after death, fill the hall.