Zines Then and Now 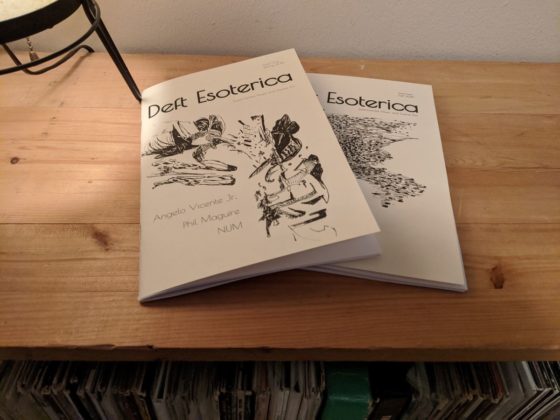 You do anything for long enough, you live through transitions. Generally these are revealed to you in hindsight, when a recollection is distinct enough from the current moment for the shifts, the fissures, to have come into focus. Sometimes, though, you experience these transitions in real time.

I have probably told this story before, but it’s a short one, so I’ll give it another go. Not long after I started, back in 1989, working for the Tower Records retail chain, we were visited at the company’s home office, in West Sacramento, by representatives of one of the country’s major music labels. Shifts were happening in the record industry, not just generic business pressures like consolidation, marked by mergers and acquisitions of record labels, but also key among the threats such familiar terms to us denizens of the 21st century as mobile, video, and technology.

However, those words didn’t mean in 1990, when the visit occurred, what they mean now. Mobile meant the prevalence of the Walkman and its ilk, and the perceived accompanying rise in home taping. Video meant MTV, and the oversize influence of a single network. Technology meant the compact disc, which was enticing music fans to buy their entire record collections all over again, to the point that even long sedate classical labels were becoming cash cows.

Wherever there are that many threats, there must be others, and it was these unknowns that were on the minds of our visitors that day.

As they toured our office and spoke with our senior staff — I was a junior editor on Tower’s music magazine, Pulse!, mostly handling its letters page and the Desert Island Discs lists from readers, when not imploring my coworkers to let me cover musicians in the orbit of the Knitting Factory — our visitors inquired about what we were listening to, and how we had come to discover it.

I wasn’t surprised, decades later, when researching my book on Aphex Twin’s album Selected Ambient Works Volume II, to learn from Clive Gabriel, who signed Aphex Twin to the publisher Chrysalis, that Gabriel himself had come to Chrysalis’ attention thanks to his writing for British music magazines. It may seem a catch-22 that a label would look to a music critic for hints at the future, since by definition much of the music being written about would already be on a label. But that isn’t always the case, and even when it is, the myopia of big labels can make them blind to the wide field of smaller ones.

In any case, I found the perspective of the visitors fascinating. I lingered in the open area of the Pulse! offices to listen in. And at some point I heard one of our visitors begin to put forward a question in a tentative tone. “Do you,” it was asked, “read … zines?” I put the ellipsis there because there was a definite pause, as if someone were testing out a newly learned term from a foreign language. What I can’t do except through comparison is note that the word was pronounced in a dramatic and sudden hush, much like the mother of Ally Sheedy’s character says “cancer” at the dinner table in the movie St. Elmo’s Fire. And what I can’t do except through description is to note that the word wasn’t pronounced “zines” as in the third syllable of “magazines,” from which the term emerged, but as “zines” with the “i” like “eye,” which is to say, a word so alien that its source and meaning were truly obscure to the person speaking it.

There’s far more to be said about zines at the start of the final decade of the 20th century, but not right now. I will note it was especially appropriate that day for the visitors to have asked this question because, unbeknownst to them, just one building away from ours was the Tower warehouse, where a vast zine distribution project was underway thanks to the vision of an employee named Doug Biggert.

I remember this visit as if it happened yesterday, even though it was three decades ago, and I am remembering it right now because just this weekend I received a package containing two zines: the first and second issues of Deft Esoterica, a project by Claude Aldous, of Canton, a city in upstate New York. I’ve been enjoying reading them, but I had to put down the stapled pieces of 8.5×11″ paper to get my memories typed out because they were distracting me from what was on the page.