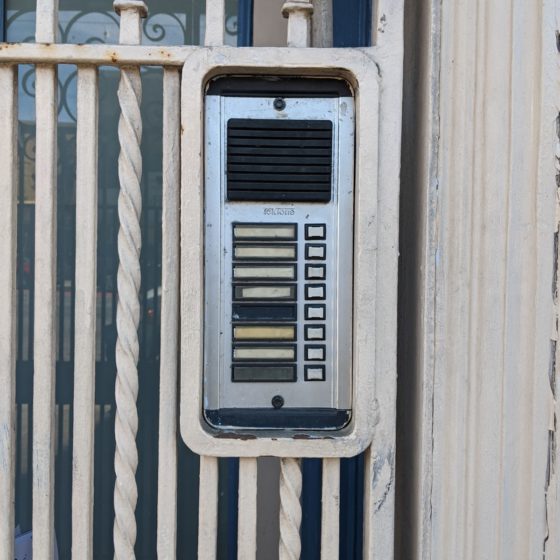 The mundane isn’t necessarily banal. The mundane can impose a weight, a presence, a deficit, one that stands in contrast with its seeming everyday-ness, its ordinariness, its blanket generality. Take, for example, the blank face with which this doorbell interface meets a visitor. There are eight rows of virtually indistinguishable units. The buttons on the right are uniform. The ones on the left might once have displayed the names of the occupiers, but the horizontal slats are now merely variations on decay: three top rows of reluctant white; then one that’s been trimmed on both sides, like someone long ago tried to swap in a replacement bit of paper; then a dark blank, the base background, presumably, of all the others; then a yellowed swath, telegraphing the nicotine coloration of its inhabitant’s aged teeth; then a brief coda of the originating quasi-white; and then a strange grey, hard for the eye to focus on, the truest absence among myriad other absences. How all but the top and bottom units’ residents might even instruct visitors to announce their arrival is unclear (“Hit the one near the middle, below the darkest one”). Perhaps there are no visitors to this building these days, and there haven’t been for longer than anyone has any desire to recall. Perhaps this address is some sort of co-op, in the ancient sense of the term, a cooperative community, whose members’ names once proudly adorned the entrance in a public display of vertically integrated solidarity, but whose mutual interdependence rose over the years in inverse proportion as the names faded and, eventually, entirely disappeared.