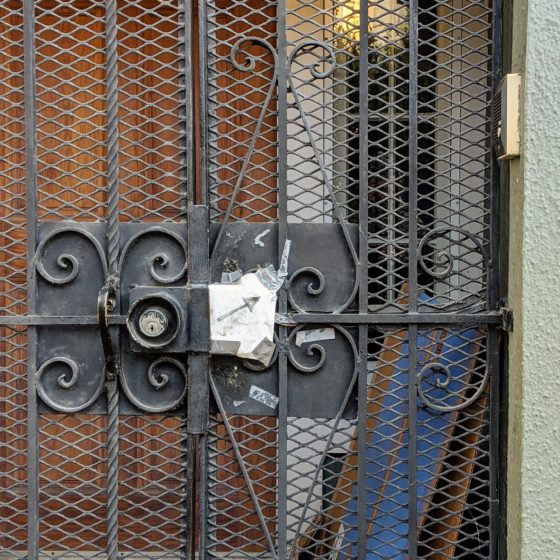 No, it’s about the tape, all that excess tape around the arrow. If the arrow tells us to look up and to the right to locate the doorbell, which it does, then the tape is more of a wink. The tape tells us that this arrow isn’t the first attempt by a resident of this home to direct the visitor’s eye, and index finger, in the desired direction.

If the arrow is intended to divert the eye, the tape draws the eye in toward the collage-like mass, to the assemblage of paper that’s molded around what must, at some point, itself have housed a doorbell, and to the haphazard duct tape that strives to keep the paper in place, and to the tape fragments themselves, which hint at prior signage efforts, and then further out along the surface to the mangled gate front that summons up thoughts of other forms of wear, that potent combination of environment and neglect.

As with so many after-market jury-rigged corrections to suboptimal doorbell fixes, this one is a treatise on numerous topics, all at once. There’s the failure of the original device, the problematic placement of the replacement, the covering up of the discarded ringer, the need to bridge the gap from old to new, the way temporary fixes become permanent ones. And hidden in the background, there is the source of so much of the visual confusion: the gate, of course, which further separated visitors from the front door sometime after the house’s original construction. Which is to say, the arrow was fated. Once the gate was introduced, the home owner (or landlord, or property management firm) had already effectively pointed an arrow in another direction.