Like pretty much all of these Buddha Machine Variations thus far, this one began with a concept, an approach. And like most of them, it ended up someplace else — less else than others, but else nonetheless. The initial technical concept was unusually precise, in that I plugged in a good half of these cables before even turning on the synthesizer, or plugging in the source audio. The audio is from the third-generation Buddha Machine, also known as Chan Fang, which dates from 2010. The loop heard here, like the others on the device, was originally performed with the qin, an ancient Chinese zither. (I once saw an epic Chinese film involving a master qin player and every time the qin was mentioned, the subtitles would say “zither,” like the audience hadn’t yet committed this fact to memory. Over time, of which there was quite a bit, this being an epic, the constant appearance of this translation got the audience laughing, which was rarely the tone the movie was going for.)

My initial goal here was to employ a technique from the previous three variations, but to try a different take on it. This involves a module that takes two inputs and sends out one output, either the lowest (the AND route) or the highest (the OR route) of the two inputs at any given time. In the previous variations, I applied this to inbound audio. This time, I sent CV (control voltage, if you’re new to synthesizers) through it, hybrid waves that were themselves the product of two combined waves. Those two outputs, the AND and OR, were then applied to the relative volume of two of the five channels in the mixer.

Here’s the mixer breakdown, starting from the leftmost channel. Channel one is … well, this is a bit odd. It’s an error. It was to be a bit of granular synthesis applied to input from the source audio. But at some point I accidentally unplugged something, and when I went to plug it back in, I simply had one input from the module going to the main input. Somehow this module continued to produce sound from earlier, so that is heard throughout, quietly. Its volume is being varied based on the AND of that comparison mentioned in the previous paragraph.

And that about covers it. I’m not going to list all the modules used, since they’ve been used in recent pieces in this series to the same purposes. I will add one module-specific note: All three of the repetitions in mixer channel three come from the same single channel of the ER-301. Previously I was doing one delay in one channel and one delay in another, but it was unnecessary. Also, this is the second time I’ve done the video from an angle, which is OK, but I realize that I failed, as a result, last time to fully document the organization of the array of cables, so here’s a still shot from straight on: 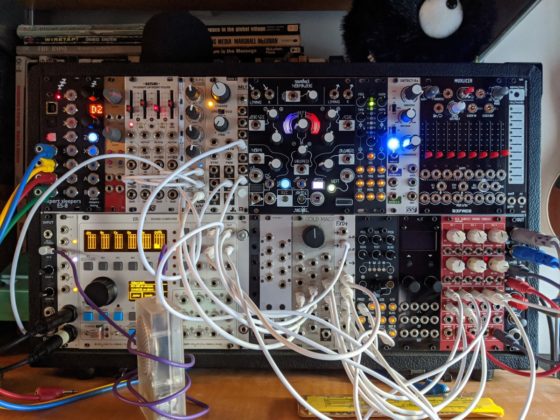