This patch follows up the one from two days ago, “Step Wise,” No. 17 in this series. There, as here, alterations in square waves were used to instantiate some melodic activity amid what otherwise would be a more static operation. The difference is that in “Step Wise,” a single square wave went back and forth, slowly alternating at an even pace between relative high and low. Here the square wave is a little more complicated, a little more rough, a little more varied. And what it produces happens in murkier territory.

There are four channels of audio going into the mixer at the end of the chain, all at pretty much the same volume level. The source audio at the start of the chain is one loop from one Buddha Machine, first generation, going through granular synthesis. The granular synthesis then goes into a filter bank that splits the audio into bands spread across the spectrum.

I’m not going to list all the modules used, since they’ve been used in recent pieces in this series to the same purposes. The main thing to keep an eye on is the left side of the tiny screen on the bottom level, the black module three in from the right (it’s an Ornament and Crime running an alternate firmware called Hemispheres, specifically the Scope utility). That’s a scope image of the voltage that’s motivating the changes in overall pitch. That little blue object hovering in space is taking the output signal of the combined Batumi/Dixie/S.P.O. modules and sending it both into the octave control of the granular synthesizer, and into the Ornament/Hemispheres oscilloscope. If you watch it, you’ll see horizontal lines go up and down, and occasionally splinter. The wave causing that visual activity is a somewhat complex one that combines two square waves in the SPO: a slow-moving one from the Batumi, and a slightly faster-moving one from the Dixie. The pitch of the latter in turn is itself being occasionally altered in pitch by a sine wave, also from the Batumi. That’s all parsed in the S.P.O., and yields the relative volumes shifts in the initial granular synthesis of the source loop. 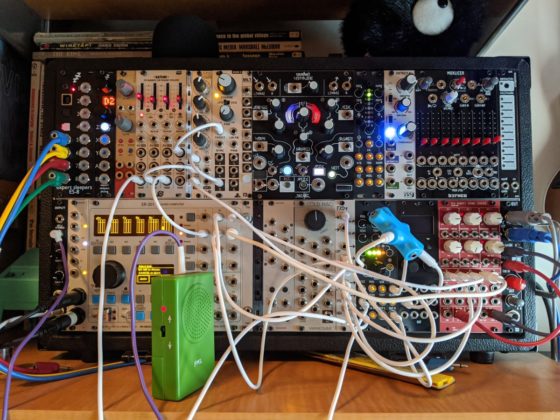