This reworking of a Buddha Machine loop is based on small, slowly accruing sub-loops (subsets of the source audio), much as was yesterday’s. There are some differences. The samples going into the buffers are more likely to cancel out the audio that preceded them, rather than build to an orchestral density (the change suits the source loop, from the fifth-generation Buddha Machine, which has a genteel, chamber-music quality). The sub-loops also each fade in and out, rather than cutting at the seam of each new sample. (Also, yesterday’s experiment used a different generation of Buddha Machine.)

When the video starts, all that’s heard is the loop itself, a combination of stately, simple piano and strings. At 26 seconds or so, a new element enters, not fully heard until about 38 seconds: it’s the source audio sliced and reworked courtesy of the Muxlicer. What’s going on is that as the audio comes through, there are eight potential ways we’ll hear it. Half of those are the audio, with the relative volume adjusted a bit (note the red faders above each of the eight jacks). Two are bands of audio extracted from the spectrum, courtesy of the FXDf module. And two are the left and right channels of the source audio going through a granular synthesizer. The pace of that Muxlicer is set by the pulse going through the lavender patch cable. The resulting Muxlicer activity goes into the first channel of the mixer (white cable).

At 1:13, a new element enters, the buffer looping. This is all happening in the ER-301 module (the Feedback Looper unit). What happens is that the source audio is being fed into a five-second loop, which itself is overwritten with small bits based on the pace set by a square wave from the Batumi (this goes into mixer channel two, yellow cable) . At 1:36, a second buffer loop enters, this one on a six-second loop (mixer channel three, blue cable). Eventually, around 3:18, the Muxlicer is turned down fully, so we only hear the contrasting buffered loops, until it all fades out. 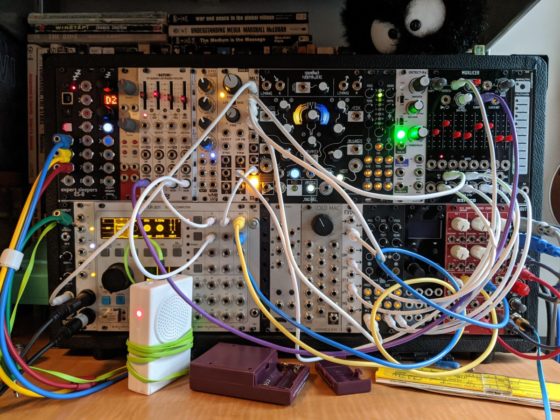