At some point during the Buddha Machine Variations series of exercises, it occurred to me that many people who might come across these videos probably haven’t ever actually heard the Buddha Machines themselves. As a result, I began, on occasion, to include the unadulterated sound of the source audio at some stage of a given piece, generally at the start of a recording, so that the contrast between, dare I say, raw and cooked would be more evident.

This piece, “Prescient Delay,” is built around three delays set at different rates. It opens with the unaltered sound of the Chan Fang model of the Buddha Machine (first released in 2010). Or at least what appears to be unaltered sound. In fact, the audio is being delayed a few seconds. This delay doesn’t affect the sound itself. What it does do is allow for other sounds to insert themselves as premonitions of the main line. The main line here is the second channel of the mixer (the yellow cable). The delays all occur in the ER-301 module, the one three in from the bottom left.

A copy of that unaltered source audio is being sent, separately, through a filter bank, one of my favorite tools, which siphons off distinct bands of the audio spectrum. One of those bands, the white cable, goes into the first channel of the mixer. It’s heard for the first time just shy of 40 seconds into the recording. The quality of this line is quieter, softer, than the main track, and because the main track is set on a delay, this little element is heard before it, giving it a kind of prescience. This line is the only one in the piece occurring in sync with the Buddha Machine itself.

Another band of the filter bank, the orange one, channel three in the mixer, is also being delayed a tad, a bit less so than the main line, so when it is potted up, around the 1:20 mark, it contributes a second premonition of the main line.

Finally, a third band of the filter bank, the blue one (channel four in the mixer), is also set on a delay that’s shorter than the main line. It’s a third premonition, but it’s something else as well. While the delay of the yellow and orange lines are fixed, the delay of this blue band is shuddering, changing slightly, hence that warble quality it has. (The effect is a bit like that of the Instant Lo Fi Junky, a synthesizer module and guitar pedal that I like very much.) This is achieved thanks to a wave form that is ever so slightly altering the value of the delay (the number of milliseconds it is removed from the source audio). The wave is produced by a combination of two waves that come out of the Batumi (note the two short white cables) and go into the S.P.O., the white cable from which goes into the third gate jack of the ER-301. At 2:20, I push a button on the Ornament and Crime module (the black one three in from the bottom right), and you can see a little oscilloscope image. That image shows the wave form that is affecting the value of the delay for the blue line. In addition, if you look at the top screen of the ER-301, you might notice the value of the delay shifting up and down rapidly just above the fourth button in from the left.

And that covers it. If you have any questions, let me know. I’m very happy with how the premonition-like quality of these early apparitions function, and how they alter my sense of the utility of delays. I previously thought of delays as things that happen “after” the main line. No longer. 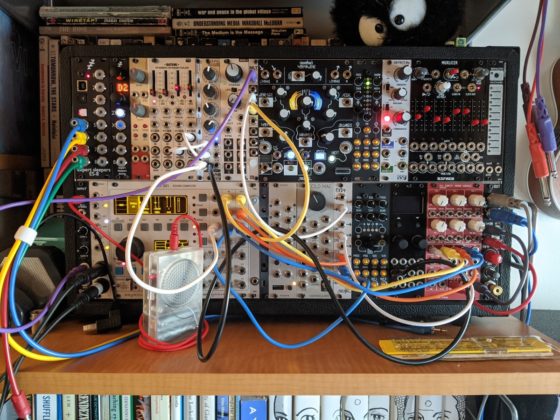