One loop from the first generation of the Buddha Machine, which turns 15 years old in 2020. The loop ends up with three variants in the mixer, channels one, two, and five. The fifth channel (lavender cable) is just the straight audio out of the Buddha Machine (a little noisier than usual, perhaps because the batteries were going). The first channel is the output of the Muxlicer, which switches between eight variants on the audio: six are spectral bands (from the FXDf), and two are channels of the granular synth (the position of which, in the Smog, is shifting regularly). The Muxlicer is going at a steady pace (clocked by the Dixie II, starting when the Muxlicer’s switch is flipped at :28), but the sequence is random thanks to an inbound sine wave (from the Batumi). The second channel, which kicks in at 3:24, is a tiny fragment of a loop that is constantly being overwritten, and it’s set off from the Muxlicer’s beat by a slight, almost half-second delay, which at first gives the contrast a sing-song quality, but eventually disappears as the amassed swell occludes virtually everything. And that’s about it, except that at 4:25 a slow wave is introduced to gently alter the volume of the original, channel-five track.

For further patch-documentation purposes, here two shots of the synthesizer: 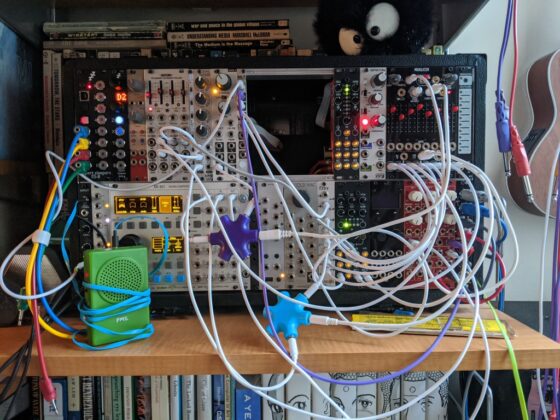 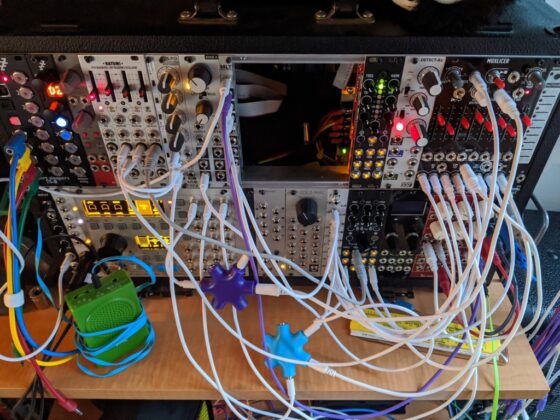