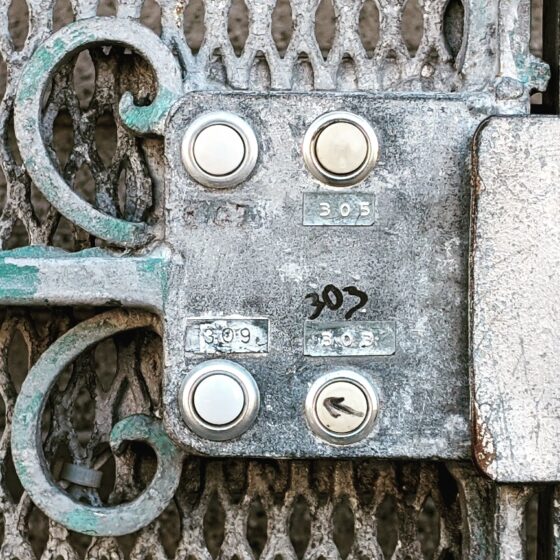 What a thing of beauty. Four buttons in two vertical pairs, tan ones on the right, white on the left. For no apparent reason, the lowest number of the four addresses is in the lower right, and then the others proceed counter-clockwise, which is to say counter-intuitively: 303, 305, 307, 309. The two labels on the right are from a different era than the one in the lower left. Both typefaces, however, share an oddness: the threes overly stylized, the zeros out of proportion. (It’s as if in the intervening years, the label maker was upgraded, but the product number remained the same, so when time came for a replacement, a process-oriented property manager trusted the paperwork and not their eyes.) As for poor 307, it lost its label long enough ago that the subsequent hand-written number has, itself, faded, left virtually illegible without the context of the neighboring units. Someone, at least, has learned a lesson and taken preemptive action with 303, reinforcing the label’s aging message with black magic marker. But what giveth also taketh away. The same marker appears to have been used to draw an arrow on the 303 button. It points up and to the left. That instruction remains open for interpretation.