On Online Concerts (and Music Plus AI)

My latest review for The Wire 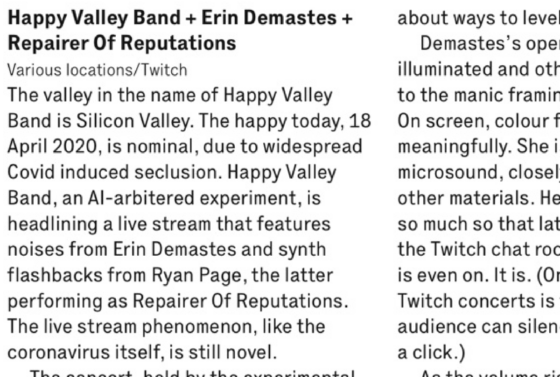 If you’re a curious listener to adventurous music, then you’ll likely recognize this typeface. I wrote a concert review that appears in the latest issue of The Wire (437, the one with Tangerine Dream on the cover, or more specifically a Robert Beatty illustration).

This is the first freelance concert review I have ever written on the same device on which I witnessed the concert. That’s because it was a streaming event, fairly early during the pandemic, two months back on April 18. It was a triple bill put on by Indexical, a non-profit promoter based in Santa Cruz, California, and featuring Happy Valley Band, Erin Demastes, and Repairer of Reputations (aka Ryan Page). Indexical isn’t a venue, per se. Indexical is an opinionated concert promoter making use of various venues. These include a gallery and a production studio, and as of the pandemic, the streaming platform Twitch, as well.

The headliner was quite the Happy Valley Band, who, under the guidance of leader David Kant, perform versions of familiar pop songs transcribed from impressions synthesized by artificial intelligence. During the show Karp characterized what they do as “destroying your favorite songs,” which is about right. In the published review I compare Happy Valley Band to a combination of Kenneth Goldsmith and PDQ Bach (cultural plundering in the service of joking forensic dismemberment). In my draft, I pondered what if David Letterman had replaced David Sanborn on the Hal Willner’s Night Music series: They sound like someone threw the notes off the roof of a building to see what happens when they splatter on the ground. Or, remember those old play-along albums called Music Minus One? On them, one part of a popular piece of music would be removed, so you could play along and feel like a member of the ensemble. The Happy Valley Band is more like Music Plus AI: the original version lingering quietly in the background, a halcyon through-line memory of less complicated times, while the machine-processed rendition stomps through the foreground. All of which said, you have to admire the group’s collective and good-humored commitment to the experiment. (There’s more on Demastes, who played a microsonic set that involved close-up live images of the sources of her audio, and Page, whose work involved fictional found footage, in the published review.)

I didn’t spend much of the review considering the then unique circumstances of the virtual event, based on my sense that (1) I didn’t want to repeat what other reviewers in the same issue might say, given the limited space, and (2) by the time the review was published, this sort of thing would be the norm. At the time, what I was thinking about was how venues and technology create new forms of intimacy (it was pretty nice to be able to just put my feet up on my desk) and memory (all three performances are archived on Twitch: Happy Valley, Demastes, and Repairer). Noise pollution is an old problem in concerts, notably from the chattering class that is fellow attendees. Light pollution rose with the advent of the cell phone. As I mention in the review, the main new irritation here was the venue itself, as Twitch, being aimed at gamers and not at people who want to focus on the performer, has a tendency to draw attention to itself, urging you to level up when you really want to just watch and listen. On the flipside, it was pretty cool to run into a friend from another city (someone I hadn’t seen since 2012) in the chat room, and to catch the name of a musician I admire who happened to show up in the audience.

In any case, pick up the latest issue for the review.