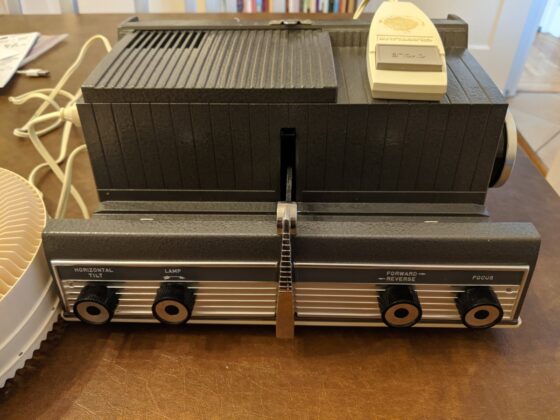 Dug this out of storage. Projected close on a wall, its images are so sharp as to challenge description. The high level of detail hovers somewhere between a printed image and a televised one, between page and screen. It has the proto-hyperreal quality of the latter, yet even given the sheer force of the slide projector’s light, it lacks the screen’s directive presence, how the screen shines its light at you, into you — how you are the thing onto which the image is, in a sense, projected. In contrast, light experienced from the projector is reflected, diminished, softened.

Still, the slide projector’s end result is brilliant and illuminated, in a way that a printed photo simply isn’t. One thing they have in common, though, the slide image and the printed photo, is texture. The wall’s surface becomes part of the image’s appearance, much as a photo owes some of its quality to the material on which it is presented.

And then, of course, there is the sound. The machine’s motor and fan vibrate with an industrial intensity, the density of this metal device so unlike commonplace 21st-century household gear. The click of each slide swapping in for the previous one announces with a multi-syllabic gesture, several clicks bundled into one. There are steps to the process: the wheel turning, the metal guide entering and retreating, not to mention the plastic impression of the button setting things in motion at the narrative juncture between each observation period.

None of these aspects were experienced as quiet way back when, but they’re especially loud now. Not just loud, they are part of the viewing experience, rather than detritus. Rather than byproduct, these are sonic part and visual parcel. In an art gallery, the slide projector today would have to get credit as “single channel audio,” or some such. But even that wouldn’t do it justice. Each sound comes from a different part of the machine. The sound of the slide projector is as three-dimensional as the resulting image is flat.