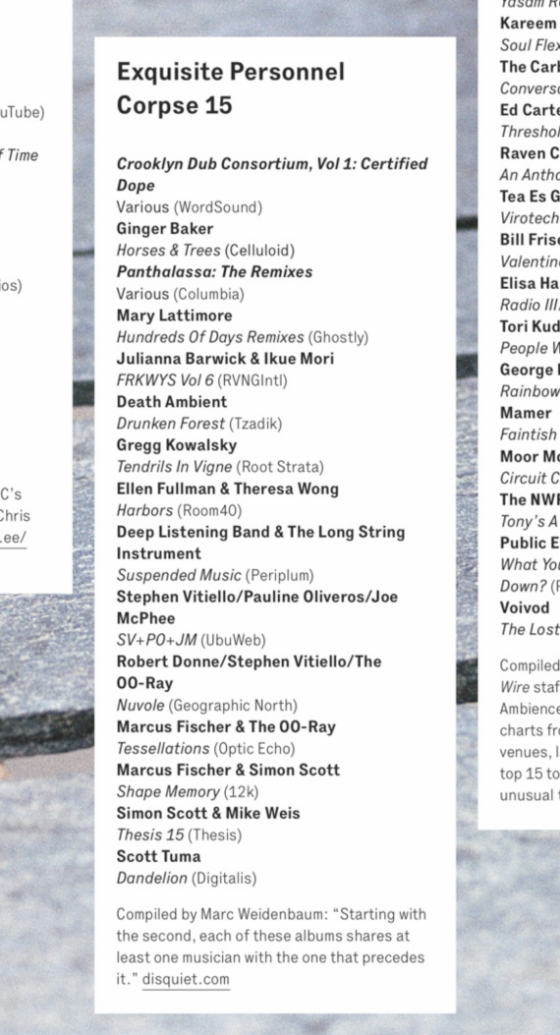 At the invitation of the magazine The Wire, I put together a playlist for the 411th issue, the one with a poolside William Basinksi on the cover (October 2020). Playlists in The Wire can take any theme the submitter desires, so long as 15 albums (or tracks, etc.) are listed. While opening a recent issue for a refresher course, I had thought, “Maybe I’ll make a list of records I play while doing cooking and the dishes” (which is pretty much Keith Richards’ Talk Is Cheap 14 times, plus whatever audiobook I’m into at the given time slotted in at number 15), and lo and behold, someone had done just that (Matt from CHEWn! Zine in the September 2020 issue).

In the end, I opted for a favorite game: connecting albums I like a lot individually by shared personnel in sequence, retaining a fairly consistent overall vibe throughout. The result was the Exquisite Personnel Corpse 15, which starts with the WordSound label compilation Crooklyn Dub Consortium, Vol. 1: Certified Dope, and ends with Scott Tuma’s Dandelion. The playlist space in The Wire is tight, so below I’ve listed the personnel who connect the dots between records, and added some observations that surfaced during the process.

A few things occurred to me as I put it together, among them:

▰ Liner notes are how I learned to listen to music, connecting the dots between records. While digital releases have to a degree removed such information from albums (the paucity of notes on Spotify, etc. is criminal), the internet fills in the blanks.

▰ An individual record is often a synecdoche of a scene, sometimes local, sometimes virtual. Great record labels are often scenes unto themselves. To make this a little more complex, I didn’t allow myself to mention the same record label twice.

▰ If I’d wanted to level up the difficulty of this, I would have connected pairs of albums that each shared only one musician in common. That would have taken a lot more time. Several of the above pairings have multiple musicians in common.

▰ Connecting by personnel is only meaningful, I think, if there’s some aesthetic through-line to the end-result playlist. Also, I don’t think it would be as rewarding if, just to make the effort easier, you start including records you don’t actually enjoy.

▰ Music releases are way more singular than they used to be. A substantial portion of my current listening is solo records, and has been for years. Solo artists are nothing new. It’s just that albums by “solo artists” used to often include backing bands. The resolute solo-ness of so many musicians today makes connecting records more difficult, and also isolates many musicians from being connected at all. In some cases, the only connecting point would be whoever masters the record. Or, ironically, whoever wrote liner notes.