▰ When you recognize yourself in a book you haven’t read since you were in junior high school:

“that look of painful, unseeing concentration found only under a pair of earphones”

▰ By and large, I don’t know about the future of newsletters, as this detail of my inbox evidences, but I enjoy putting out This Week in Sound (tinyletter.com/disquiet). It’s a helpful way for me to (as it turns out) process my inbox, and leads to good conversations with readers.

▰ This image is by Ethan Hein. It’s from two years ago, and it exhibits the chain of interactions among asynchronous collaborators in series of connected Disquiet Junto projects. We’re doing the same sequence right now: We begin with solos, which become duets, and then trios. 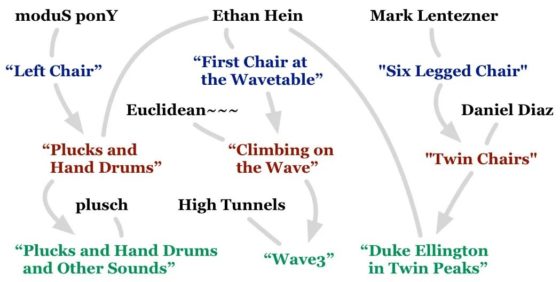 ▰ In today’s post. Looking forward to it. And, no, my eyewear is self-evidently not as cool as Miles Davis’. 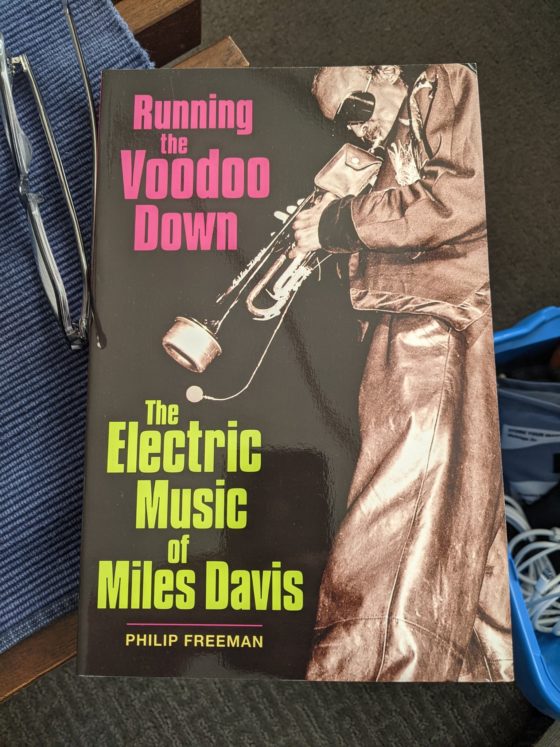 ▰ It’s been one thing to have musical collaborators all over the world. It’s a whole other thing, in our golden age of streaming, to be able to discuss each other’s local television series offerings.

▰ I did two episodes of the Disquietude ambient podcast in 2017, and then recognized the world had broken and I needed to moderate my activities. I think I’m getting it going again. I have material mostly sorted. One musician even made a special version of her track I requested.

▰ My tablet’s facial recognition seems to recognize my face better when I give it a quizzical “Don’t you recognize my face yet?” look, versus my normal vaguely blank everyday face look. I’m sure this is not a good feedback loop to enter into.

▰ When you get to “Black Satin” and you have this sense of relief, both the familiarity of what’s playing, and the realization of what you’ve just emerged from 20 minutes of. I’m spending the afternoon On the Corner.

2021: having an oscillator complex

▰ I was using an app the other day, and when I swiped through to a subsequent page it paused and the screen briefly showed:

And then the next screen popped up. I couldn’t reproduce this. It must just happen when the app unexpectedly pauses.

▰ Major thanks to Łukasz Langa (twitter.com/llanga) for summing this up, putting into helpful words a big part of what I think of as the Disquiet Junto music community’s combination of mutually supportive and self-directed. What Langa is referring to is that folks shouldn’t be hesitant to post something. The Junto isn’t about finished work. It’s about getting started.

▰ It has been so long since I wrote a letter by hand other than a thank you note that I’ve found myself typing it and then transcribing it. Even this is a thank you note, just a slightly longer one than normal.

▰ YouTube radicalization is real. I’ve been practicing 12-bar blues on guitar to live recordings of 80 bpm shuffle beats, and the algorithm just suggested a 70 bpm video. At this point I’ll be in an Earth cover band by spring.

▰ Arguably years of experience help, but sure, OK

▰ The GameStop situation is further evidence that (1) we live in a simulacrum and (2) its CPU is failing.

▰ I used to first type “this seems cool” every time I tried out a new piece of technology that involved data input. Now I type “this doesn’t seem like a hassle.”

▰ Remembering my early experiences with Twitter when all I’d do was post stray sounds I happened to hear.

▰ I do my best to stick to a Kindle Paperwhite on the rare occasion I’m up in the middle of the night. A recent bad night was cured when I played audiobook I’d been listening to but slowed the speed considerably. It … was … so … slow … I … fell … asleep … fast. A friend had recommended listening to audiobooks of ancient history, and that led me to worry I’d find it too interesting, which led me to wonder how to make something seem boring, which led to me slowing it down. I was listening to a spy novel, and it still knocked me out.

▰ Getting retweeted by twitter.com/instrumentBot is the highlight of my day.

▰ Just to confirm, that’s a Bruce Springsteen box set, a Beatles album, and a Wham album on the shelf behind Alessandro Cortini in that new synth video? (The one for the Make Noise Strega.)