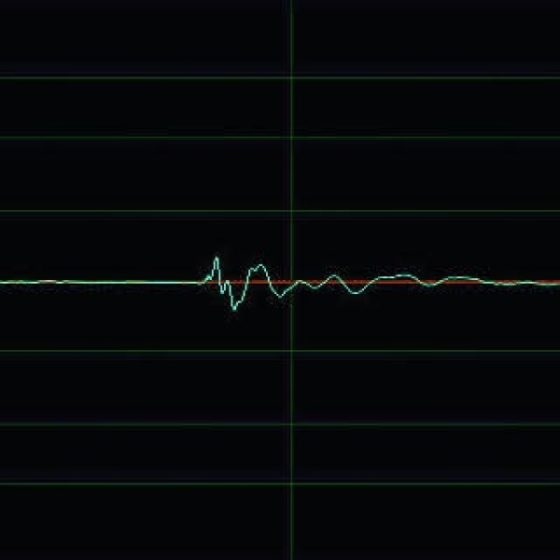 I spent a lot of time over the weekend editing audio and I never got sick of looking at waveforms. If anything, these guides for my work became distractions from my work. This particular image was barely a blip in a lengthy expanse of signal and noise. It signified a near-silence that I felt was necessary to silence further.

There were other silences, as well, silences of differing sorts, clusters of which came to represent shared characteristics, subsets, a typology of silences. If individually the beautiful images distracted me, the patterns they suggested in combination helped me get my work done, served as guideposts: an atlas of the quiet. I could tell which silence, for example, was room silence and which was still-mumbling human silence. I noticed that “um”s looked like goldfish, and that when someone said the same word twice, the second time somehow could overlap the first, as if for an instant they were saying two words at once — well, one word, the end and the start of it simultaneously, a snake eating its own tail. If words were repeated as a verbal tick, I could sometimes tell from looking at them which was right. Not which was right objectively, but which was right in the context of the words around it.

The silences were especially interesting. There’d be a silence between words, and I’d cut it in half, and it’d still feel longer than half the original length. I’d cut that in half, and it continued to feel long. Trim and trim, and still I had to cut hard to get it right. It’s as if the measure of silence between words isn’t about length of time at all. It’s about a particular threshold, under which is natural speech, and beyond which is noticeable hesitation. And in the waveform I could see the hesitation. And in the editing tool, I could excise it. And the most beautiful waveforms — some spare, elegant curves, others little squashed and distended curlicues — were invariably the ones representing audio that never made the final cut.