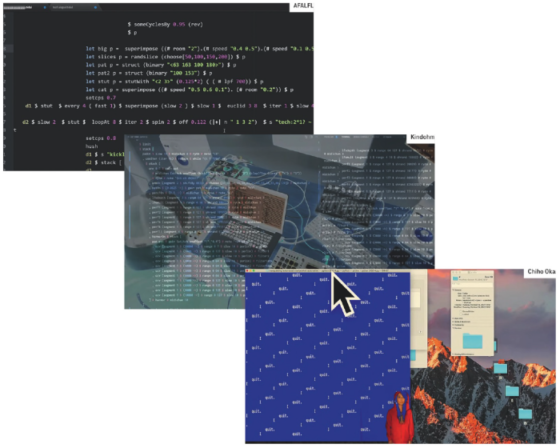 Kindohm is typing in a room different from the one I am in now. His screen is superimposed on my screen. Video of him typing is superimposed on what he himself types: lines of computer code in nested columns. These dual layered images he projects are color-reversed, leaving his skin dark, with a sickly blue tint. His beard, a resulting white fuzz, gives the illusion that he’s twice his actual age.

The music is euphorically broken. Kindohm’s beats — and this is almost entirely beats, not so much absent a vocalist as manifestly dissenting from such decoration — stagger and strut, rev up and evaporate, pounce and recoil. They promise a downbeat, then slyly renege on the fundamental club music social contract.

Based in Minneapolis, Minnesota, Kindohm (government name: Mike Hodnick) is participating in a mid-February 2021 livecoding livestream, under the Alpaca Sessions banner, part of the week-long No Bounds Festival, out of Sheffield, England. A trio of algorave performances constitute today’s 90 minute show. It’s hosted by Alex McLean, who helped coin the term algorave and created one of its leading languages, TidalCycles. We’re all used to musicians using laptops on stage but what’s different in algorave is those musicians aren’t running programs; they’re programming the music in real-time. Like Kindohm, they might employ external gear for support (today he expends more effort on his Midi Fighter Twister than on his laptop), but the code is the thing.

This No Bounds event also features both Chiho Oka (Tokyo, Japan) and AFALFL (Paris, France). Due to the pandemic, we’re all — audience, performers, and host alike — in our disparate locations. (Olivia Jack, who created the Hydra visual coding platform, even pops up in the chat window.) Yes, livestreams became widely familiar in 2020, but there’s something quite digitally native about a livecoding stream. Had algorave not already existed, Covid-19 would certainly have engendered this cultural variant.

Up first comes Oka, who is from the future, literally. While it’s still 13 February in Sheffield, the file name on her screen reveals it’s already Valentine’s Day where she is. Of the event’s three sets, Oka’s proves the most choreographed. Kindohm might adjust code and tweak equipment settings, but Oka presents something that’s deeply Rhizome-atic: a carefully honed breed of digital performance art. She jams at one point on nothing but her MacBook’s alert presets. At another, folders move under the guidance of a massive cursor, producing a sound-effects medley. And all along she’s present: a tiny figure in a red hoodie, as if her own mascot.

Closing the event is AFALFL (born Mamady Diarra), the one performer today hiding entirely from view. As white noise surfs left and right and back, he adjusts scripts onscreen in the “dark mode” color scheme familiar to software engineers around the globe. For AFALFL, however, dark mode is a full-on sonic aesthetic. The music is murky and chaotic, not just how it noisily veers, but how its components vary and jar, the sole constants being a kick drum and error beep.

Language within AFALFL’s code lends context: both obvious terms, like legato and speed, and seemingly project-specific ones, like 808bd, striate, and superimpose. It’s all there, naked for the audience to see, but true to the word “code,” what’s unfolding isn’t necessarily self-explanatory.

This article I wrote originally appeared in the June 2021 issue (number 448) of The Wire. It had the following header: “A historical exploration of foghorns sounding warnings to ships approaching the shore in a storm reflects on their sonic and cultural legacy.”

This article I wrote originally appeared in the April 2021 issue (number 446) of The Wire, which included the above graphic. Director’s cut alert: I reinserted a clause that had been deleted for space from the printed version. The concert is archived on YouTube: