Like many major cities, San Francisco is haunted by numerous defunct cinemas, left behind by technological and cultural shifts. These buildings linger as decrepit shells, occasionally refurbished as anything from batting cages to video game arcades and non-profit offices. Hollywood has fully divested; all that remain are the marquees.

One such theater, the former Grand in the city’s Mission District, was revived in 2014 as the latest home to Gray Area Foundation for the Arts. It has since become a key location at the contested intersection of tech and the arts by hosting concerts, coding workshops, and occasionally actual films. 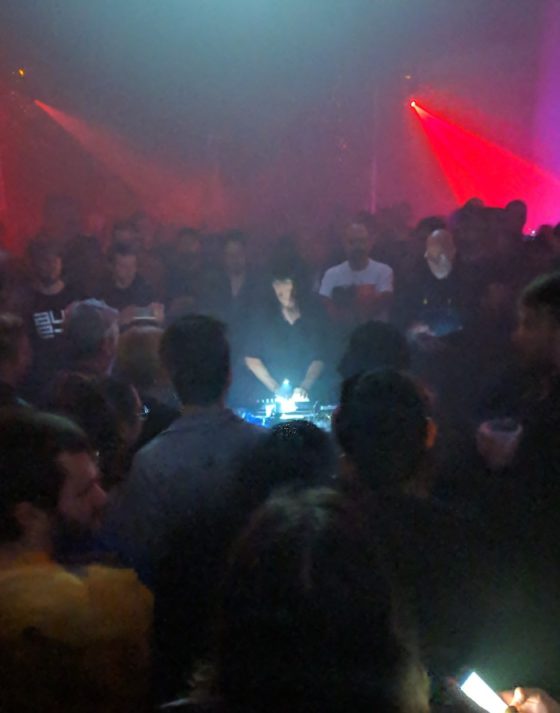 Rrose is the center of attention.

Gray Area coordinates with two neighborhood galleries for the week-long Recombinant festival, founded by longtime immersive-cinema impresario Naut Humon, co-founder of Asphodel Records. Events range from sonic abstraction to trenchant dance music, the one constant a massive six by 12 meter screen in Gray Area’s seatless main hall. The satellite installations are expressly audiovisual: Ulf Langheinrich’s NIL, a stroboscopic barrage at the Ohio gallery, coaxes retinas toward altered states with vibrant color fields, while Earthworks, a multiscreen sprawl at the Lab, quivers and gurgles with amoeboid correlations to seismic data, a creation of Superconductor, aka the duo of Ruth Jarman and Joe Gerhardt.

Each performer at Recombinant either embraces or evades the massive screen’s presence. Aïsha Devi bled images onto adjacent walls, challenging the surface’s dominion, her music a joyous torrent of cyber-spiritual extroversion. When musicians such as Hiro Kone, pushing out downtempo beats, and Marcus Schmickler, emanating artful noise, treat the screen as an afterthought, the relative absence feels intentionally spartan.

Most acts employ the vast canvas as a synchronized backdrop to sonic activities, like Wolfgang Voigt’s GAS on opening night, his cyclopean industrial momentum a score to journeys through environmental footage reminiscent of his color-coded album covers. Electric Indigo make a strong impression with what might be called sound-design techno, the screen occasionally reorienting to a dramatic beat. In the lobby, additional installations explored color-sound alignment, including therapeutic simulations from Li Alin and Craig Dorety. 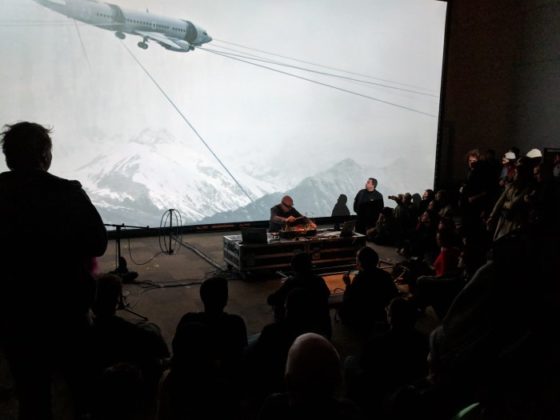 The festival highlight is Herman Kolgen, who for two nights took over the hall, moving from large screen to stage to intimate set-ups. He commands the room, shifting attention as he roams from station to station. The show opened with accompaniment by William Winant and Antonio Gennaro on percussion, performing a sleek rendering of Steve Reich’s “Different Trains” to video of tragic locomotives (some damaged miniatures, others exploded CGI renderings). Kolgen’s “Isotopp” is a showstopping marvel, as he coaxes a corona-like glass circle into states of electrostatic ecstasy, and the audience along with it. Another highlight is Rrose, who the night before, courtesy of heavily protected floor cabling, performed a set of fierce, terse techno. 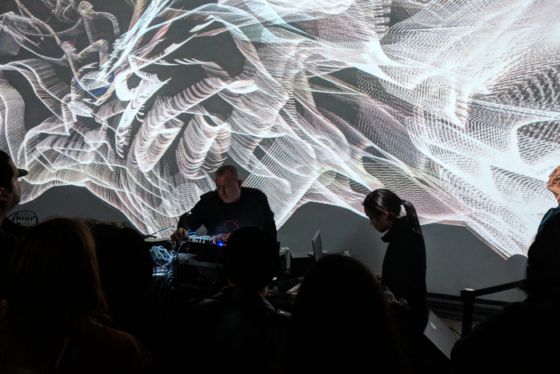 Drew McDowall and Florence To in their time machine

Recombinant’s final night coincides with the second anniversary of the Ghost Ship fire, which killed 36 people at a warehouse concert in nearby Oakland. Early in the evening, two acts — ichael Gendreau and the aptly named Infrasound — pay homage by pushing low-frequency audio to ceiling-rattling effect. Drew McDowall and Florence To closed the festival with Coil’s waveform-maximalist work Time Machines. To’s low-res images providing limited illumination, the dense and shuddering music served as a proper memorial, alternately numbing and euphoric.

There’s some additional context in a post I made when I first announced the article’s publication. This was my first article published in The Wire. I took all the above photos. None of them accompanied the article. I’m just fond of them, and while the one of Rrose isn’t great, it really captures for me my experience of the highly memorable moment.

This article I wrote originally appeared in the March 2019 issue (number 421) of The Wire.