(And I understand the answer now. I’m just reflecting on the difficulty I had in forming the question. And I’m not sure I can, yet, concisely explain the answer. But I’m making strides.)

(The difference between understanding and the ability to explain being an important step toward, you know, actually understanding. On a positive note, I did get the underlying concept. I just couldn’t verbalize it. For me, being unable to verbalize something is, like, claustrophobic.)

▰ Recently got reacquainted with the Watersons due to their music’s use in Autumn de Wilde’s (highly enjoyable) film adaptation of Jane Austen’s novel Emma. RIP, Norma Waterson (obituary: theguardian.com).

I love this bit from their song “Country Life”: “And I like to hear them small birds singing / Merrily upon their laylums.” The meaning of “laylums” today is apparently not entirely clear. There are varied interpretations (“chorus, or group of birds,” “meadow or cropland,” “fallow land”). Much online discussion is uncertain: afolksongaday, traditionalmusic.co.uk, efdss.org. Those links go to a handful of people who have specific (and differing) opinions on the topic. A general search for “laylums” yields lots of conversation among people looking to find out what it means.

▰ There was a fun but of chatter on Twitter due to Robert Pattinson having been quoted in GQ as saying how he bided his time in the Batman suit (nme.com): ““I’d be in the tent just making ambient electronic music in the suit, looking over the cowl.” This led to a lot of fun jokes, and I weighed in with a thread, beginning with the ideas that Alfred just puts “Bat-” stickers next to the logos on a lot of synth equipment he buys used via Reverb and Craigslist (Bat-Moog, Bat-sequencer, etc).

▰ Michel Fiffe’s sound effects are where it’s at. 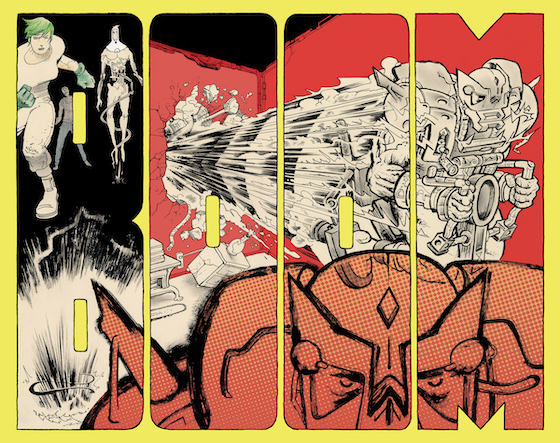 ▰ Clearly a lot of Hassell fans in mourning. I post this announcement, and then Twitter goes down. :)