John Kelly at The Comics Journal put together a great memorial to comics artist Justin Green, whose work I edited in Tower Records’ Pulse! magazine for many years.

Justin Green lived in Sacramento when I did, in the early 1990s. As I write this, it’s been barely a month since he died. I still grieve for my friend who taught me about art and life, emphasis on the “and.” A folder filled with remnants of our collaboration provides some solace.

I’d moved from Brooklyn to California’s capital city in 1989, a year out of college, to take a job as an editor at Pulse!, Tower Records’ print magazine. After two years, I suggested to my fellow editors that we experiment with comics in the magazine. The first two artists I signed up were local. Having never edited comics before, I looked for people whom I could work with in person. This was late 1991. Email was rare, cell phones even more so. We spoke by landline, sent faxes, wrote letters, and met in midtown Sacramento cafes like Greta’s and the Weatherstone. The first of these artists was Adrian Tomine, who I knew lived in town because his mailing address appeared in his self-published Optic Nerve, one of numerous minicomics I was buying at the time. The second was Justin Green.

I was aware of Justin’s comics from the magazine Raw, the 1991 issue of which listed Sacramento as his location. I tracked him down, and thus began the longest-running comic that Pulse! published, for upwards of a decade. It’s comically—forgive the common pun—absurd that the first two artists I published in Pulse! were so talented, given that I actively, at the beginning, limited myself to locals. It’s also cosmically—pushing the pun further—intriguing that one of them had, decades earlier, produced an ur-text of autobiographical comics, and the other was among the youngest artists pursuing that line of creative activity. Arrangements were formalized at the end of 1991, and their initial Pulse! comics appeared in the first issues of 1992. Justin’s presence in the magazine no doubt helped as I built our roster of contributors, who in time came to include his wife, Carol Tyler.

There are a lot of things I could share about working with Justin at such length and regularity. I could talk about his love for glass ink nibs. Or about how he aggressively remade any scripts supplied by writers other than himself (I wrote a few), always for the better. Or about his painstaking use of multiple drafts to refine stories. Or about how the strips’ seemingly most surreal grace notes were often there from the first sketch (whimsy as linchpin). Or about how telling it was, to me, that this elder statesman of underground comics was always open to editorial input, while some far younger artists (not Adrian) flinched and bristled at editing, needing to be sensitively coaxed.

The thing I think is important to share in the context of The Comics Journal is how central financial matters were to Justin’s comics. He was, in the truest sense, a working artist. His art (in Pulse!, other commissions, sign painting) was defined by his need to make a living. It’s understood how Justin’s autobiographical work was informed by his religious upbringing. It’s just as important to understand how, in adulthood, practical matters determined and shaped his self-expression. One marvel among many of Justin’s comics is just how much of himself he brought to what was, always, the next job.

John included four piece of ephemera I shared with him, including two rough drafts and a two-page letter Justin sent me. Here’s one of the rough drafts: 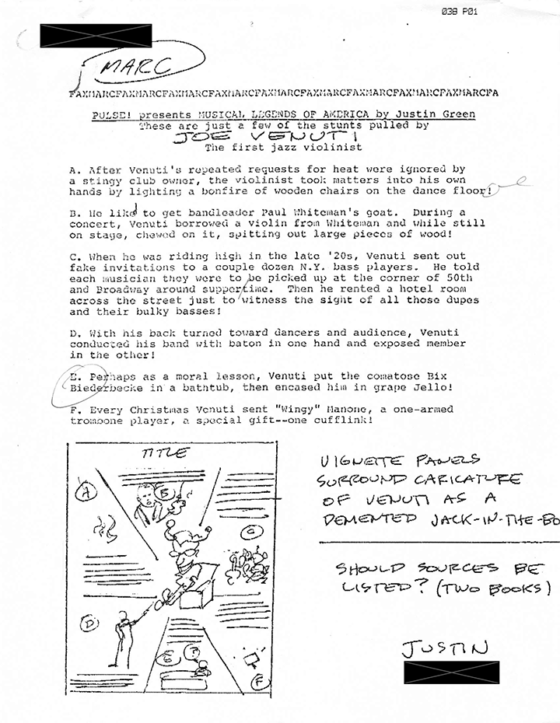 One thought on “Peers and Friends Remember Justin Green”