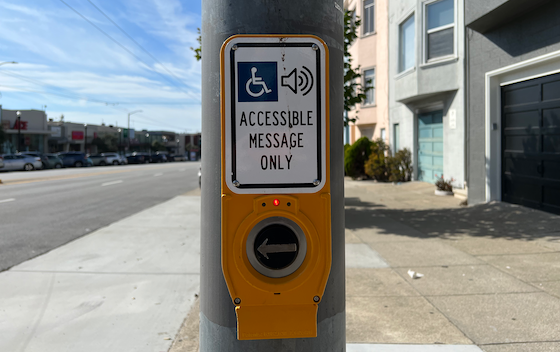 Maybe it’s just me, but I find that the meaning of the phrase “ᴀᴄᴄᴇssɪʙʟᴇ ᴍᴇssᴀɢᴇ ᴏɴʟʏ” in this context is, for lack of a better word, inaccessible. Well, not fully inaccessible. I was able to access some information by looking it up. What it means is that you don’t need to press the button to safely cross. Instead, the button is simply to provide a sonic alert — which makes me wonder why there’s a button in the first place. And if there is to be a button, why have it point across the street like other crossing signals, instead of displaying a symbol that means, you know, “press this to hear something”?

This device must be fairly new. The reason I say so is that at the moment a Google search (with quotation marks) for the phrase “ᴀᴄᴄᴇssɪʙʟᴇ ᴍᴇssᴀɢᴇ ᴏɴʟʏ” yields a mere 10 results — 11 as of when I post this to my disquiet.com website — and only 6 of which even apply. (The others include one that relates to wireless routers, another two about the programming language C++, and one to a photo on Reddit that happens to show one of these buttons but is actually about something else entirely — something quite funny — which means that Google’s algorithmic robots read and indexed the text shown within the photo).

Of those meager search results, one that lends some useful context for the phrase is a master-plan document from the Montgomery County Planning Department in Maryland, which is citing San Francisco as an example of the device’s utility. It reads:

Precedent(s): In San Francisco, APS at locations where there is always a pedestrian signal read “Accessible Message Only” so people know they do not need to press to safely cross.

APS stands for “Accessible Pedestrian Signals.” I learned that and a lot of other things during this deep dive — which is what should happen if you look, and listen, closely — none of which convinced me this crossing signal is well-designed. Sounds are an essential part of public safety. Sounds are often all the more effective in coordination with other senses (here: touch and sight). This signal, however, is not an example of effective sensory coordination.

And speaking of looking closely: if you do so, you may notice some Braille on the sign.

I couldn’t sort out the meaning of the Braille with any of the character charts I found online, so I asked around (which is to say I posted a request on Twitter, Mastodon, and Facebook), and the super-helpful @buttcliff on Twitter pitched in, big time. I learned that this isn’t just Braille, but “contracted Grade 2 Braille,” which is like Braille shorthand. (Using contracted Grade 2 Braille can, for example, make Braille books a lot thinner.) Those first two visible dots confused me because I didn’t even see them on any Braille charts online, and now I understand that they mean that everything following them is a word. In this case, the Braille reads: “C A L I,” then a contraction for “FOR,” then “N,” and then something obscured by apparent damage to the sign, presumably “I A” — which makes sense, because I was standing at an intersection on California Street here in San Francisco when I took the photo.

I’m guessing that someone dependent on Braille could make sense of this without the “I A,” but it says something that I started sorting out what this sign meant because it’s confusing, and it turned out it had an additional level of illegibility I wasn’t even initially aware of. Now that’s a sign.