A new year means new resolutions, among them 12k record label head Taylor Deupree‘s public declaration that he will post one sound per day, such as a January 6 entry described as follows: “it’s cold today. the baseboard heat in my studio turning on” (MP3). The brief track opens with a quiet clack, before the sound of metal slowly bending into place plays out against a low-level drone. What’s especially interesting about Deupree’s initiation of this project is that while tracks such as this share a meditative quality and textural simplicity that is of a piece with his own composed and performed recordings, Deupree is not an electronic musician to typically include field recordings in his work.

Previous entries thus far this year include (on January 4) the gentle rumble of the air train at JFK, interrupted by an automated conductor (MP3), and, the very first entry in the series, dated January 1, an ocean soundscape (MP3). Deupree, in one of his haiku-brief descriptions, explains of the latter: “set the recorder on coarse sand. the ocean, wind and leaves overhead. the percussive sounds at the end are large sand particles.”

Resolutions have limited success rates, but Deupree’s is worth betting on. In 2008 he made good on his one-Polaroid-per-day promise, closing on this Hawaiian scene: 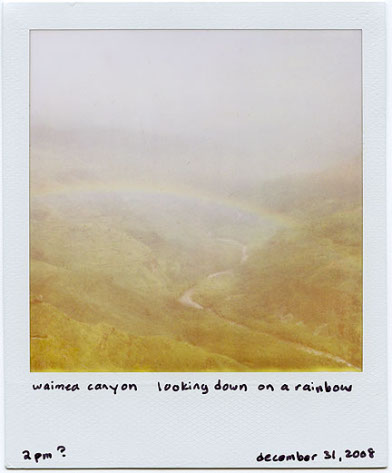 In his first entry on the subject (at 12kblog.wordpress.com, the blog where he is posting the MP3s), he describes his plan:

i have decided that in 2009, starting on january 1st, of course, i will carry a small digital audio recorder with me every day of the year and record one sound per day throughout 2009. i rarely work with “field recordings.”as a musician i do not incorporate them much into my music. however, as a musician i am always listening. this exercise will not only force me to listen more carefully every day, but open my own sound palette, expanding into field recording.

i will not set a time limit on each day’s recordings, but rather make each recording as long as it needs to be to capture whatever it is i’ll be capturing. along with the recorder i will carry a small notebook and make a note of date and time as well as location and “subject.”

Readers might also find of interest Aaron Ximm’s “One-Minute Vacations,” which featured weekly (more or less) field recordings submitted by various participants from around the world (quietamerican.org). Ximm’s project began in January 2002, and it ran through April 2008.