Saturday night, December 20, 2008, my next to final night in Japan on a recent trip, I was fortunate enough to find myself in the city of Chiba, because that same evening, Richie Hawtin was headlining a concert at Makuhari Messe, a massive convention center around which Chiba’s downtown area has seemingly been constructed.

I don’t know if the sound at the rave-like event was actually more quiet than at the American equivalent. Perhaps this was an aural illusion, fostered by text messaging, and having nothing to do with geography. All I know is that people certainly moved around differently in these dark, conversation-curtailing spaces than they used to. The room didn’t have the sense of immersion that seems essential to the true 2:00am DJ experience. I came to wonder, over the course of the evening, and as morning approached, if text messaging has ruined the rave. The whole impression of remoteness, and the tension between that remoteness and the contrary knowledge that you’re an integral part of the crowd, are diminished when you can just type “Meet me near the keg” and send it to a friend.

There were two rooms at the Makuhari hall, the smaller one for DJs of a more danceable variety, and the larger where Hawtin played — at least I presume it was him — as 3:00am approached, a dank yet arid, darker, more minimal techno than anything else heard that evening. The event was called Womb Adventure, with over a dozen performers on the bill. (Details at womb.co.jp.)

I started off, shortly after midnight, in the smaller room, where Kitsune was doing a tandem performance. Kitsune is Gildas LoaÃ«c of France and Masaya Kuroki of Japan, and their poppy techno provided a peculiarly incomplete return to techno’s roots. This inherently automated music that has of late been turned into pop by Daft Punk (with whom LoaÃ«c has worked), and subsequently absorbed into hip-hop by Kanye West, was suddenly left on its lonesome, pretty much back in its raw state. And yet the whole pop aura still hovered about it. This was in part because Kitsune wasn’t shy about dropping in the occasional proper song, but all the more so because now those sounds, the big beats and candy-colored lo-rez audio synthesis, simply bring to mind what might ordinarily appear on an FM radio station.

The videos that unfurled behind Kitsune on a wide, stage-spanning screen had a retro-future feel, these images of foxes — the band is named Kitsune after all — rendered in a vector-graphics style, clearly intended to suggest old video games, like Asteroids or the early Star Wars arcade fave, the one in which you reenact Luke Skywalker’s flight down the Death Star trench. But the images also, with their pinprick geometry plotting rudimentary animal forms, resembled constellations. Of course, for this crowd, at this time of night, whether it’s 25 years ago or 3,000, it’s all just ancient history.

The Kitsune set was oddly inexpert. It was fun, certainly, and they mixed in the familiar and the unfamiliar, but there were certainly no new tricks, and sometimes songs were left to play for extended periods. There was a lot of dramatically precise knob-twiddling, which the crowd ate up, and there was one extended silence that was pretty impressive, one of those moments when a vacuum fills the room, and you sense just how much music there had been seconds earlier.

There was considerably less dancing than there might be at a U.S. equivalent of such an event. And I don’t say that just to comfort myself because I don’t really dance; I mostly go to hear the music on a louder sound system than I could possibly have at home, to feel it in my chest as much as to hear it, maybe more so the latter. I’m still convinced the sound wasn’t as loud as it could have been. I felt no need to wear ear plugs, and my chest never had that resounding-cavity vibration.

As for Hawtin, it was a thrilling sight, that many people on a floor that large, while he played the most minimal of beats. I wonder, when I take in minimal techno like his, what exactly fills the space between the beats. Is it a shadow cast by immensity of the beats themselves, is it a beauty in the interspersed silences, or is it just a matter of personality — in this case, is what is between the beats merely the fact that “Richie Hawtin” is making those beats? Are the beats, in other words, set against a mental backdrop of star power?

For Kitsune the projected images were antique technology, and for Hawtin they were of-the-moment: high-tech, minimal geometric patterns, like some over-sized iPhone application. Yet if any single vision distinguished the event from what might take place in San Francisco or L.A., it was this: at 3:00 am you walk out past an interior field of clear plastic bags the size of beach balls, perfectly round beach balls, tightly wrapped, each with its own number designating its rightful owner, and packed inside everything from purses to backpacks to jackets to shoes, glimpse-able in these Saran Wrap pods. No hulking security guards, no fear of theft, just hundreds upon hundreds of balls, time capsules for a musical space voyage.

As for Chiba, it couldn’t provide a more perfect setting for Richie Hawtin’s techno. It’s one of those cities with nothing but malls and corporate skyscrapers, concrete as far as the eye can see. There’s nothing but commerce there, commerce and concrete. Imagine a middle-class Dubai, or an Anaheim bereft of Disney. 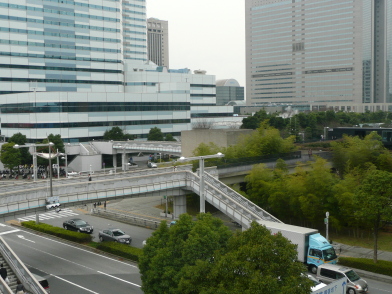 The architecture is concrete and glass. The key distinguishing feature is a maze of walkways that provide a second-story means to navigate the area, human monorails founded on the assumption that there would be more traffic — foot and car — than there is. Tall buildings circle the downtown, each bearing a corporate logo. There is Sharp, and Fujitsu, and IBM, and NTT, and Sumitomo, and others marked by unfamiliar multinational sigils.

Chiba is, famously, the location identified in the title of the first chapter of William Gibson’s genre-defining cyberpunk novel, Neuromancer. He describes the sky as being tuned to a television set on a dead channel — and for this port town, with its inclement winter weather and all the industrial activity, it’s not an inapt comparison.

The morning after the concert, I found myself facing this sign, which had nothing to do with the Hawtin concert, yet summed it up perfectly. It’s actually the name of a small “shopping arcade” for electronics: 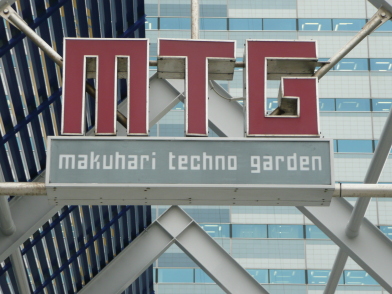 Greater Tokyo, of which Chiba is a part, lends a unique context to Hawtin’s music. This is because Tokyo is a place where you are surrounded if not by electronic music, then at least by electronically produced sounds, all of it virtually devoid of hard edges — it’s just soothing tones, the saccharine mall melodies and the unique chimes that ring in subway stations. Hawtin’s music, that chiaroscuro of resolute beats, offers a kind of photographic negative image of the sonic life of Tokyo. 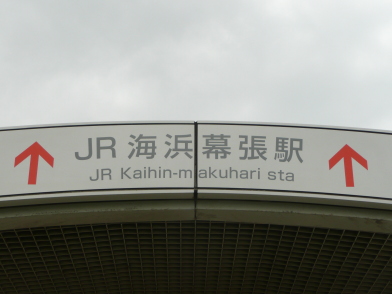