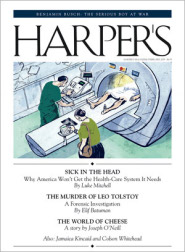 The first two paragraphs of “The War on Telephone Poles,” an essay by Eula Biss, as printed in the February 2009 issue of the magazine Harper’s:

“Of what use is such an invention?”the New York World asked in 1876 after Alexander Graham Bell first demonstrated his telephone. The nation was not waiting for the telephone. Bell’s financial backers asked him not to work on his invention because it seemed too dubious an investment. The idea on which the telephone depended—that every home in the country could be connected with a vast network of wires suspend ed from poles set an average of one hundred feet apart—seemed far less likely than the idea that the human voice could be transmitted through a wire.

For a short time, the telephone was little more than a novelty. For ten cents you could see it demonstrated by Bell himself, in a church, along with singing and recitations by local talent. From some distance away, Bell would receive a call from “the invisible Tom Watson.”Then the telephone became a plaything of the rich. A Boston banker paid for a private line between his office and his house so that he could let his family know exactly when he would be home for dinner. Mark Twain was among the first Americans to own a telephone, but he wasn’t completely taken with the device. “The human voice carries entirely too far as it is,”he remarked.

Biss is currently an artist-in-residence at Northwestern University. The full essay is available online only to subscribers (harpers.org), but the issue is still on newsstands. “The War on Telephone Poles” is due out this month in Biss’s book Notes from No Man’s Land (Graywolf Press, graywolfpress.org). More on Biss at eulabiss.net.