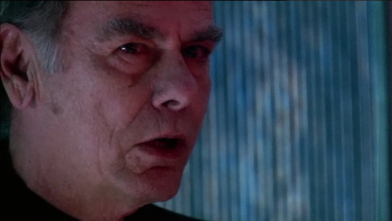 Apparently androids dream of a lot more than electric sheep. This is Battlestar Galactica‘s Number One (aka Cavil, aka John), played by Dean Stockwell, in the episode that aired on Friday, February 13. He is speaking with Ellen, the only recently divulged “12th cylon,” played by Kate Vernon.

Cavil: In all your travels, have you ever seen a star supernova?

Cavil: No. Well, I have. I saw a star explode and send out the building blocks of the universe, other stars, other planets, and eventually other life, a supernova, creation itself. I was there. I wanted to see it, and be part of the moment. And you know how I perceived one of the most glorious events in the universe? With these ridiculous gelatinous orbs in my skull. With eyes designed to perceive only a tiny fraction of the EM spectrum, with ears designed only to hear vibrations in the air.

Ellen: The five of us designed you to be as human as possible.

Cavil: I don’t want to be human. I want to see gamma rays, I want to hear X-rays, and I want to smell dark matter. Do you see the absurdity of what I am? I can’t even express these things properly, because I have to — I have to conceptualize complex ideas in this stupid, limiting spoken language, but I know I want to reach out with something other than these prehensile paws, and feel the solar wind of a supernova flowing over me. I’m a machine, and I can know much more, I could experience so much more, but I’m trapped in this absurd body. And why? Because my five creators thought that God wanted it that way.

The episode is titled “No Exit.” The script is the first to be credited to Ryan Mottesheard, who judging by that monologue may be something of a Greg Egan fan. It’s also reminiscent of Grant Morrison’s Superman story about Lois Lane’s birthday (disquiet.com). The full episode is streaming for free, for the time being, at scifi.com/battlestar. 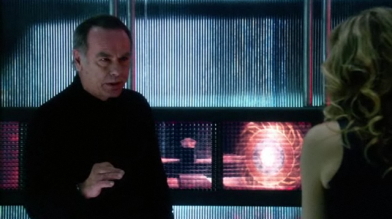 4 thoughts on “Quote of the Week: Way Beyond Electric Sheep”