To say there’s a lot of great graffiti in Los Angeles is an understatement. The place is utterly embraced by street art, and each visit to that underappreciated metropolis yields one new site-specific public art installation after another.

Among my favorites is a manifesto — as longstanding as it is brief — that simply reads “Post Mad Bills.” It’s less a retort to the municipal admonition “Post No Bills” than it is a statement: If you’re going to leave your mark, leave an inspired one.

No surprise in Los Angeles that much of the most inspired graffiti — be it spray paint, magic marker, mural, sticker, or stencil — is concerned with music. And one personal favorite of mine is the poster “SMOG LA,” the photo of which below was shot across the street from the Crewest Gallery in downtown LA this past weekend: 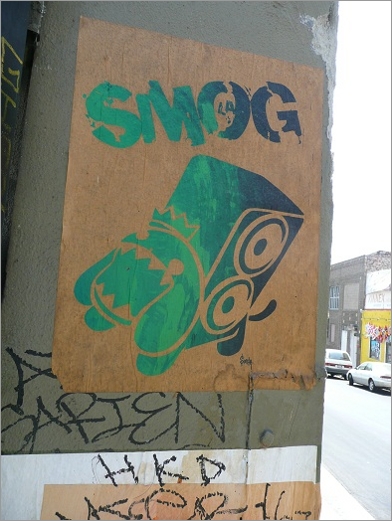 The SMOG LA poster is a drawing of a cartoon car, its back holding a massive speaker, its front end the gaping maw of some fierce yet cute automo-beast. It even has a little tail (always the mix of kowai and kawaii, of scary and adorable). I like to imagine that the SMOG beast is munching on air pollution, and in turn transforming it into sound. (Note that the “SMOG” logo virtually suffocates its internal “LA.”) That’s a fitting interpretation, since so many graffiti opponents compare it to a sort of pollution itself.

And more on the dubstep club SMOG LA at, you guessed it, smogla.com.