The Christian Marclay installation currently at the MOCA in Los Angeles is 16 generic, black monitors set in a circle; each monitor on a pedestal; each pedestal a tall, stark white box. On each monitor, one of 16 different videos displays human hands in white gloves investigating different objects, and the audio for each video is a likewise pristine, no-background-noise document of the object — as it is shaken, or rubbed against something, or banged. 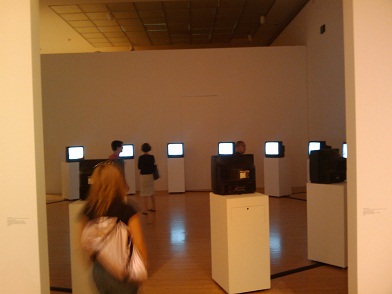 Many of these are common household items, like a travel toothbrush (see image below), its little clear case knocked and brushed, making tiny noises as a result. There’s also a bright green hanging house plant, its leaves ever so slightly rustling. Some of the items are inherently musical, like a spinning noisemaker, and a child’s xylophone. Some or associatively so, like a sealed copy of a Yoko Ono vinyl LP, its plastic covering emanating that once common soft-yet-proscriptive flutter. 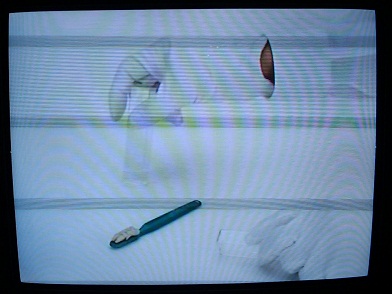 If the individual investigations are routinized and hermetic, the overall effect — should one stand in the center of the speakers — is of some catalog cacophony. It brought to mind, more than anything else, the installation in late 2007 and early 2008 at PS1 in Queens, New York, of Rainer Werner Fassbinder’s Berlin Alexanderplatz, a 15-hour film that was divided into 14 parts, each shown in a separate makeshift room, the rooms standalone (almost outhouse-like) structures set in a circle. In each room, you could watch an individual segment, or you could stand in the center of the rooms (an interesting variation on the more common “center of the room”), and be immersed in the sonic simultaneity.

As one friend who visited the Marclay exhibit with me two weekends back put it, the collection of videos look like alien surveillance of domestic life on this planet. The piece is titled “Shake Rattle and Roll (Fluxmix)” (2004). 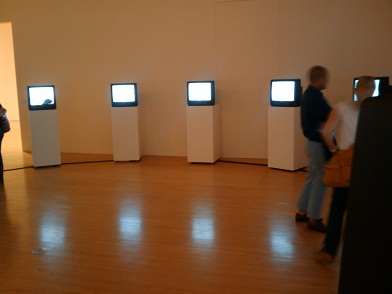 More at moca.org (the Grand Avenue MOCA), where it is part of the exhibit Collecting History: Highlighting Recent Acquisitions, which is scheduled to run from July 12 through October 19.