Once upon a time, a concert premiere in Europe meant waiting a few days for a news report. Now it means waiting a few hours before someone uploads a recording.

Case in point, Longplayer, an ongoing project by musician and artist Jem Finer (best known as a founding member of the Pogues), who hosted a performance of it last weekend at the Roundhouse in London, on September 12. The Roundhouse appears to be a place where old punks go to make sound art; it was the site of the recent installation of former Talking Heads lead singer David Byrne’s Playing the Building.

Finer’s Longplayer, inspired by the Long Now Foundation (which has inspired music previously by both Brian Eno, who was part of the think tank that helped Finer at the early stages of the Longplayer project, and Neal Stephenson, in his novel Anathem), is a 1,000-year composition, segments of which were performed on endlessly resonant Tibetan prayer bowls (MP3), as shown here: 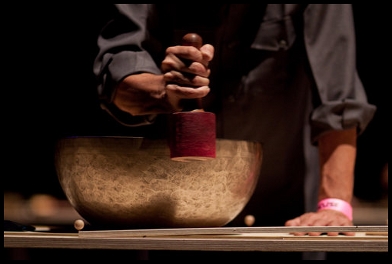 The above photo and MP3 (along with an even higher-definition FLAC audio recording) were posted by Tim Ferguson at encosion.tumblr.com. More on the project at longplayer.org, including an explanation of its graphical score, depicted here: