Made it last night, albeit late into the evening, to the first night of the second annual Second Annual International Ambient Industrial Music Festival in downtown San Francisco. The two-night event was advertised on that Bible of Bay Area out-music activity, bayimproviser.com. The location was posted, with a certain air of post-rave mystery, as being “Within 4 blocks of Powell BART station in downtown San Francisco.” You had to send an email to an address that was half Aleister Crowley, half Burning Man in order to obtain the physical address, which turned out to be a former warehouse and now residence, with ancient wood floors, old but cozy couches, an OK sound system, and at least one man in full body paint making sound with a heavily processed Nintendo DS.

Shortly after I arrived, Thomas Dimuzio was joined on the makeshift stage by three others in a jam, an artfully blunt collision of analog oscillators, PC-driven noise-making, and torqued vocals. Dimuzio was on guitar, which he had explained earlier was being simultaneously sent to various speakers around the room, each speaker presenting the signal through a different effect. Also on the bill that evening was Kwisp, Noisepsalm, Cursed Chimera, and Ure Thrall. That’s Dimuzio second from the left in this photo, shot in the relatively dark confines of the performance space: 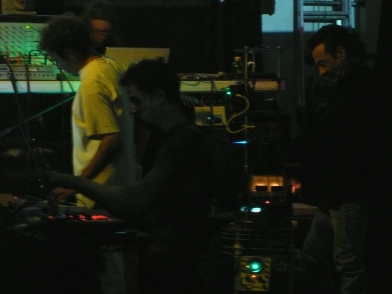 The second night is tonight, Saturday, September 19, featuring Free Rein, Nux Vomica, Voice of Eye, and Death of the West on what’s billed a s a “full octophonic sound system.” Details at iamindust.com.