Bill Laswell brought his traveling noise-reggae fusion collective Method of Defiance to San Francisco last night, September 18. They played for an hour and a half at the Regency, an old hall on a desolate stretch of Van Ness Avenue that used to be home to regal car dealerships. The crowd was small but enthusiastic, and for every attendee, there are certain to be a dozen friends who will learn just how special a night they missed out on. 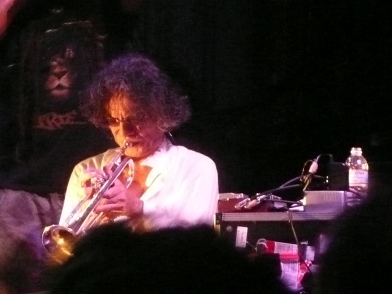 The band included Bernie Worrell on Clavinet, synthesizer, and organ. Skeletal thin, his bandanna and earring suggesting a role in a future Pirates of the Caribbean movie, the Parliament-Funkadelic keyboardist brought a genial funk to the proceedings, though it was surprisingly more Ray Charles than George Clinton, more Genius + Soul = Jazz than Chocolate City. He greeted the audience with an opening play on “I Left My Heart in San Francisco,” and late in the show he took a solo that moved quickly from song to song, from Parliament, to a bit of Talking Heads (with whom he toured and recorded), to chamber music, to Jimi Hendix. Hendrix died in 1970 on the day of the concert, September 18. Born in 1944, Worrell is, to put things in historical perspective, just two years Henrix’s junior. (On drums was Guy Licata, who, to complete this chronological tangent, was born eight years after Hendrix passed away.)

And, of course, on bass was Laswell, whose hulking presence matched the gaping-maw echo on his deeply dub-dense instrument, a chest-rattling sound that he milked in a solo late in the show, when he played the riff from Black Sabbath’s “Iron Man.” The catalyst behind Method of Defiance, he is more éminence grise than band leader, more lurking backing figure than front man.

Two vocalists were present, Doctor Israel and Garrison Hawk, both of whom made strong impressions, especially Israel, who doubled on dub effects.

The key reason I attended the concert (there was a lot challenging it that evening, including the third night at the San Francisco Electronic Music Festival, where Joan La Barbara was scheduled to perform, as well as the willfully under-publicized Second Annual International Ambient Industrial Music Festival) was the presence of Japanese trumpeter Toshinori Kondo, who is perhaps best known outside Japan for the album Ki-Oku. That album was a collaboration with Japanese turntablist DJ Krush, who is also a member of Method of Defiance, though he didn’t make it to the U.S. for this tour. (Krush will be back, solo, in time for the October 17 Treasure Island Music Festival in San Francisco.) Ki-Oku, released a decade ago, fused Kondo’s Miles Davis–inspired, effects-laden trumpet playing with Krush’s ever-rarefied beats, which have the feel of hip-hop whittled to the bone.

Live, Kondo is, simply put, a monster. There were enough effects on his trumpet at the Regency last night to fuel a Michael Bay movie — streaming ribbons of sound emanated from his horn, from which he would produce shimmery scales, violently rapid flurries, and, on one occasion, a wisp of static electricity that sounded like a candle being squelched. He swayed in place, remaining seated for most of the show, his face stern and deep in concentration. One highlight of the concert was a duet with Israel. (Though Method of Defiance played as a band throughout the night, there were numerous temporary duos and trios interspersed.) Israel stood at the front of the stage with his Macintosh open, and let loose an unadulterated recording of the Who’s “Who Are You” — just the first 15 seconds or so, and as the stereo-scoping organ (thank you, Rod Argent) came, in its unnatural repetition, to resemble some pulsing Terry Riley or Steve Reich composition, Israel then began to effect his own live mix on the original, turning it into a dubstep breakdown, while Kondo injected taut, brutal trumpet jabs.

There’s an admirable looseness to Method of Defiance. Watching them play is in part like a jazz performance, with the song references, the temporary pairings of musicians, and the improvisatory intentions. Reggae’s roots in dub, in studio innovation, is also very much a concern, which is why Kondo’s unnatural sound is so critical to the group’s overall success. The only time in the entire show that Kondo’s trumpet sounded like a trumpet was when Israel playfully stuck his microphone into its bell.