Quote of the Week: Three Locations of Sound, 1948

From the introduction to the new book In the Blink of an Ear: Toward a Non-Cochlear Sonic Art by Seth Kim-Cohen:

The beginning is never the beginning. Before 1948, there was 1947, and so on. Nevertheless, thought finds it useful to indicate “here” or “there,” “now” or “then.” The thinking of this book accordingly begins in 1948 in three different places: the Office de Radiodiffusion-Télévision FranÃ§aise in Paris; the Muzak Corporation in Fort Mill, South Carolina; and the Macomba Lounge in Chicago. By taking up its task and its story in these three locations, this book starts to construct a claim: that something changed as as result of what happened in these three places, in this one year. What this book proposes is that the events in Paris, Fort Mill, and Chicago were the iconic symptoms of a change in music, a change in music has it had been conceived and practiced, primarily in Europe and North America. 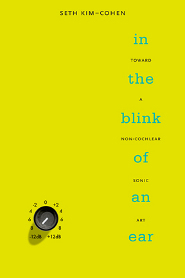