The installation “Vertical Wire Music” is a new reinterpretation of Alvin Lucier‘s “Music on a Long Thin Wire” (1977). Last month marked the first anniversary of its October 18, 2008, debut at the Berlin University of the Arts (UniversitÃ¤t der Künste Berlin). This version involves a 30-meter steel string suspended in a tall vertical staircase, as pictured here: 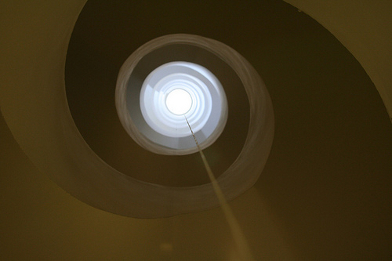 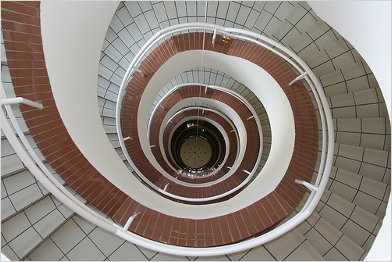 The work is a collaboration between artists Martin Backes, Christoph Illing, and Heidrun Schramm, all graduates of the school’s program in sound studies.

Lucier’s original score is in the form of instructional music — it isn’t a traditional score (i.e., notes on a page) but a rough sketch combined with detailed written instructions. Despite its simple title, the enactment of Lucier’s work is anything but. The piece also calls for magnets and an audio oscillator, and for the performer to adjust volume levels over the course of a given performance.

This version by Backes, Illing, and Schramm is not a performance, per se — it does not strictly abide to Lucier’s original. They have ingeniously adapted his work to exist as a constant presence — their reinterpretation, thus, shifts “Music on a Long Thin Wire” to a sculptural mode from a concert mode.

More on the installation, in German, at udk-berlin.de.