These two drawings by Iannis Xenakis are currently on show at the Drawing Center in Manhattan as part of the exhibit Composer, Architect, Visionary. The top one is “Study for Terretektorh” (c. 1965-1966), the bottom “Study for Metastaseis” (c. 1953). Both are parts of graphic scores that characterize the abstract, percussive, maximalist, highly demanding (for both musician and listener) work that Xenakis created up until his death in 2001. 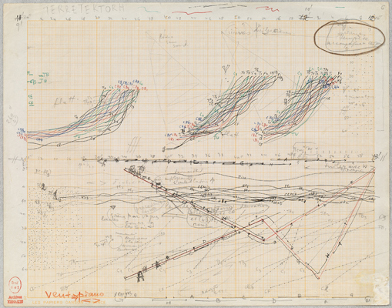 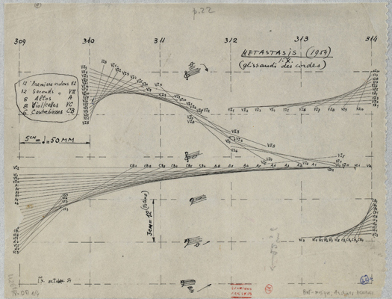 There’s been something of a surge in interest in graphic notation of musical composition in recent years, notably in the Every Sound You Can Imagine exhibit, first staged at the Contemporary Arts Museum Houston (October 2 – December 7, 2008) and later, in expanded form, at the now sadly defunct New Langton Arts in San Fransisco (February 5 – March 28, 2009), as well as the show Between Thought and Sound at the Kitchen in Manhattan (September 7, 2007- October 20, 2007). All these shows, like the Xenakis one, focus on the non-traditional strains of compositional visuals that flourished in the mid to late 20th century, and the arrival of the 21st.

There’s numerous other illustrations at drawingcenter.org, as well as videos that show how the images correlate with the sound of the particular pieces, among them these two: youtube.com, youtube.com.

The beauty of these videos is how clear and precise that correlation is — how what seems visually cacophonous and wildly extrapolation on paper proves to be fairly Newtonian in terms of the direct relation between image and sound, vector and continuity, density and volume, and so forth.

The show just opened on Thursday, January 14, and it is open through April 8, with a variety of talks and performances occurring throughout that run.