It wasn’t the night that prog died, though it was billed as “This is what happens when you kill prog.”

On the postcard for the concert held last Wednesday, January 13, at Cafe du Nord in San Francisco, “Kill Prog” was in large letters in the center, set in blood red against a darker background image that seemed to show the ceiling of a tunnel. 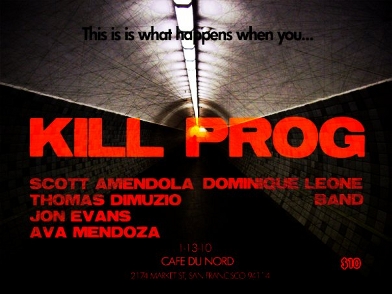 The image was appropriate, even if the musicians assembled at the basement-level speakeasy had come not to kill prog but to unearth it. They were tunneling back in time, to an era of jazz and rock fusion, and approaching it with a mix of rigor and affection.

If they were killing prog, they killed it they way one kills one’s heroes — to whittle away the lesser aspects, until what’s left is admirable enough to hold up to one’s standards. 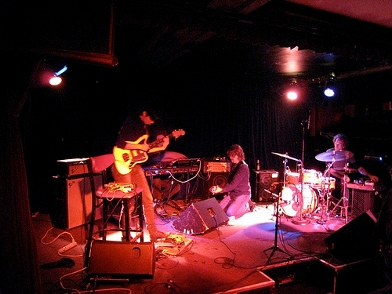 At times I found myself thinking of MVVP, the New Orleans supergroup consisting of Stanton Moore, Johnny Vidacovich, Rich Vogel, and George Porter, though Amendola and company were less interested in trance-like communal music-making, and more in simultaneous individual soloing that allowed for stark, illuminating contrasts.

The opening act, the Dominique Leone Band, was a modular ensemble led by Leone on keyboards and vocals (the latter as nakedly impassioned as they are self-effacingly thin) — “modular” because a trumpeter and saxophonist occasionally joined the core of Leone, Matt Ingalls (clarinet), Shayna Dunkelman on Xylosynth (the sonic palette of which shifted with each song), and a guitarist whose name I didn’t catch, and who moved between electric and acoustic. Leone’s original songs channel pure-pop melodies and emotions through a performance style that is deeply informed by minimalist composition, by intricate melodic patterning and extended, dreamy repetition — the result suggested Animal Collective covering the works of Steely Dan, or of Steely Dan covering the songs of Philip Glass.