It’s near impossible that an art exhibit focused on Brazil would not have some sort of musical or otherwise sonic content, and the current show at the Yerba Buena Center for the Arts in San Francisco is no exception.

Titled When Lives Become Form: Contemporary Brazilian Art, 1960s to the Present, the sprawling show takes for its poster a retouched photo of young (and almost comically well-endowed) TropicÃ¡lia leader Caetano Veloso, his red cape and exaggerated smile making him look like an art superhero.

Key among the exhibited works is “CabeÃ§a AcÃºstica” (Acoustic Head), a 1996 object made from aluminum, rubber, and a single hinge by the artist Marepe, a Brazilian born in 1970. It is shown here: 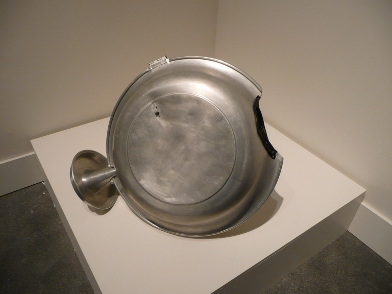 The acoustic head is situated in the show below a framed photo of its employment in a performance, as shot by Marcondes Dourado, and made available courtesy of Galeria Luisa Strina in SÃ£o Paulo, Brazil. The same photo appeared in another show, How Latitudes Become Forms, at the Walker Art Center in Minneapolis back in 2003: 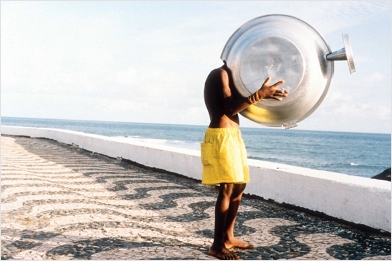 The Marepe “CabeÃ§a AcÃºstica” object holds its own, whether used as an icon of Brazilian art, or of culture in an age of globalization. As with any sound-related art that is presented in silence, the Marepe piece embodies a certain ambiguity. In this case, does it symbolize focus or myopia — is a human whose head is placed inside the gadget benefiting from the emphasis on sound, or cut off from site, smell, and other senses?

In addition to the Marepe piece, there is in the back of the YBCA exhibit a large room in that pulses like a daytime rave, its colorful installation walls featuring an ongoing projection of Warhol Factory”“style communitarian art playfulness by the ensemble Assume Vivid Astro Focus (AVAG), aka Eli Sudbrack and Christope Haimade Pierson, plus various friends.