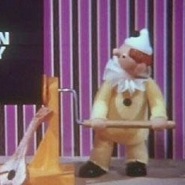 When musicians plumb the murky depths of their nostalgia, one might think they run the risk of alienating, or at least confusing, an audience with whom they do not share a common pop-cultural background. Camberwick Green was the name of a British TV series for children that apparently ran for a short time in the mid-1960s. It made enough of an impression on Guy Birkin of Nottingham, England, that he took a sample of the show’s opening theme music — a mix of music-box melody and spoken introduction — and fashioned from it his own contemporarily glitchy yet backward-glancing rendition.

Birkin makes his home at soundcloud.com/notl, where his moniker is an adorable emoticon, :Â¬l. His reworking of the Camberwick theme opens with a spacey, head-trip bit of hazy, gaseous oddness (an appropriate time-warp signifier), but soon enough the looping trinkets of the original melody, along with select bits of the spoken voice-over (a word here and there, really), form a randomly rhythmic yet undeniably soothing piece of music. Drawing distant resources from his psyche, Birkin has reshaped them in a form of musical commentary on innocence and the passage of time.

I can’t help but think that the opening couplet of the series’ narration programmed a young Birkin at a subconscious level to eventually open up that “musical box” himself and make with it what he chose:

Here is a box, a musical box,
wound up and ready to play.
But this box can hold a secret inside.
Can you guess what is in it today?

For reference, there appears to be a brief video of the show’s opening moments, unmolested, at youtube.com. The “cover image” for Birkin’s track, appearing up above, is a still shot of a moment from the TV series. Below is a still image from the YouTube video, showing the musical box in question: 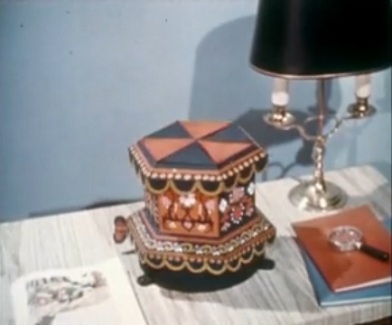 Back in February, I made note in this space of an earlier Birkin track, titled “bass drone 6c” (disquiet.com).