Image of the Week: Liquid Architecture 2010 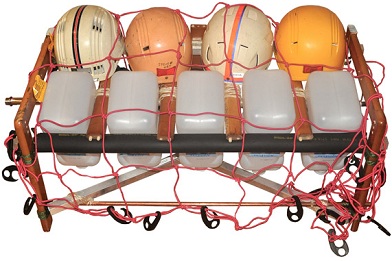 The above image is a photo of “Manifon,” a work of art (“helmets, watertanks, netting [2010]”) by Rown McNaught. It was included as part of the exhibit The Sound Playground, a group exhibit coordinated by Bus Projects and Craft Victoria, and curated by Amelia Douglas and Nella Themelios. Douglas and Themelios commissioned various Melbourne, Australia, artists to create instruments (plus “sound sculptures and sonic installations”) that would be performed as well as displayed. The other artists include Ros Bandt and Albert Mishriki, Rod Cooper, and Emma Lashmar:

“Rod Cooper presents a new series of ”˜sonic portraits’ in which items of clothing cast in concrete become the armature for the aural conjuring of well known personalities in the Australian sound scene. Emma Lashmar offers an exquisite glass installation designed to be bowed and played percussively. Ros Bandt and Albert Mishriki’s original music-boxes place the focus on disguise and gesture in the generation of sound, whilst Rowan McNaught’s interactive Manifon offers a new take on an ancient instrument.”

There has been an explosion of sound-related art in recent years, and it’s coming from all directions — artists making sound, musicians making art, curators staking out territory in the Venn Diagram overlap thereof. McNaught’s contraption seems like a smartly put together readymade, and its apparent dual function (both as sculpture and as instrument) speaks to the challenge that artists find themselves faced with. Especially since the “Manifon” seems intended to be banged on, somewhere there may be a gallerist asking at what point the performance decreases the work’s potential valuation. More power to McNaught for apparently not being concerned with such things.

The exhibit runs July 6 through 17, and is part of the 11th annual Liquid Architecture sound festival (liquidarchitecture.org.au). More at busprojects.com.au, craftvic.org.au, and fortyfivedownstairs.com.