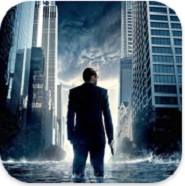 Have a piece up from this morning at boingboing.net taking a look at the brand new iOS app for the film Inception. The app is no mere highly branded phone fodder (you know, the ones packed with framed still images, weak interactive mini-games, and links to trailers for unrelated movies). It’s a lovingly realized rendition of the RjDj app, done in collaboration with the folks behind the film, including director Christopher Nolan and the film’s composer, Hans Zimmer, overseen by Michael Breidenbrüker of RjDj parent company Reality Jockey. Full piece: “Music Apps Killed the MP3 Star.” 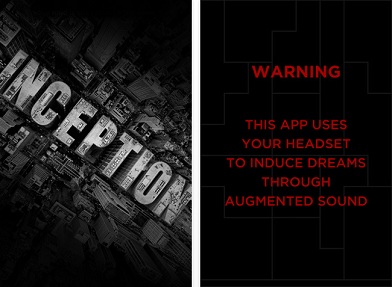 Dream Machine: Four screen shots from the iOS app for the film Inception 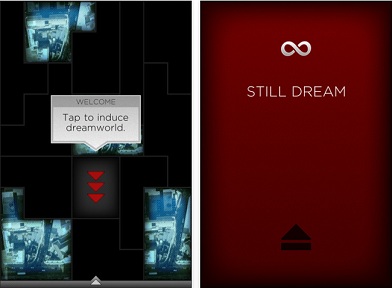 A cursory search of this site finds almost two dozen mentions of RjDj since September 2009, most of them Twitter observations typed somewhere out in the world, where the software has taken a busker’s trumpet and turned it into a cellophane ribbon of ambient sound, or has echoed a pneumatic drill until it’s a dank minimal-techno beat. Often as not, these moments have felt filmic, bringing to mind sequences in Michael Winterbottom’s Code 46, when the light technological mediation of experience was enough to make one feel just ever so slightly in the future.

The adoption of RjDj as a part of the massively popular Inception franchise is a great opportunity for reactive sound to reach a broader audience.

It’s also a useful reminder of how context is essential in adapting to new ways of thinking about, and participating in, sound (and, yes, a marketing budget and Leonardo DiCaprio‘s blue eyes do help). As of this writing, the Inception app has a four-star average rating: 36 five-star, 11 one-star, 12 in between — and at least two of those negative reviews are purely technical (Bluetooth and iPhone functionality issues). The latest version of RjDj has, by coincidence, exactly the same number of five- and one-star reviews, but far more (38) in between — and out of the 8,631 reviews that RjDj has received thus far (Apple lets you see the ratings for the latest version of an app, and for the app over the history of its iterative upgrades), it has a three-star average rating, but there are more one-star reviews (2,187) than there are any of the other stars (five-star comes in a close second, at 2,160).

Sound, it’s worth noting, was an essential part of the structure of Inception. The film signaled a shift between dream levels by using an orchestration of a maudlin Ã‰dith Piaf pop song heard elsewhere in the film, slowed down almost beyond recognition (see: “On the Sudden Popularity of Glacial Sound”).

PS: I also realize that somehow I’ve managed to write two times in as many days about things that resolve back to the prog rock band Yes. In the Boing Boing piece on Inception, I reference Zimmer’s association with the band the Buggles, which was founded by two people who worked with Yes (Trevor Horn and Geoff Downes), and the day prior I interviewed the Bad Plus, who covered Yes’ “Long Distance Runaround” on its 2008 album, For All I Care.