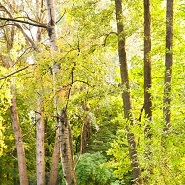 The brief description of the track “Morning Forest Bloom” by Travis Nobles mentions that the piece of music includes a field recording that Nobles borrowed, with permission, from the Creative Commons site freesound.org. Those, however, aren’t the only found sounds on the track. At over half an hour long, it is comprised largely of musical notes that will be familiar to anyone who has used the iOS app Bloom, a generative music work developed by Brian Eno and Peter Chilvers.

“Morning Forest Bloom” first came to my attention when Nobles participated in what has turned out to be a fairly lengthy discussion of music apps on this site earlier this week (“A Bloom Is a Bloom Is a Bloom”, with 27 comments and counting). The discussion dove in deep into whether an app is an instrument, and whether the developers of music apps fully understand what they are doing when they use the term “instrument” to describe their efforts. Do they give up ownership, for example, of the sounds? As one participant, Nipperkin, put it, “Whatever the designer/coder intended on making and marketing it, once it is out in the world, people are going to use as they wish.”

Nobles makes no great claims for his work, describing it as “not particularly creative … but … pleasant to listen to.” Mixed, as they are, with the field recordings of birdsong, the Bloom notes bring to mind the last truly great Eno album, Thursday Afternoon, which is an ecstatic occurrence of daybreak ambience. Pleasant, most certainly.

Track originally posted at soundcloud.com/travisnobles. More on Nobles at his blog, hiddenplacemusic.blogspot.com. That field recording is by someone who goes by inchadney at freesound.org;