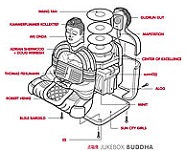 Over at the Buddha Machine discussion at my recent boingboing.net post on the latest generation of the device (“If You Meet a Buddha Machine on the Road, Hack It”), FM3 member Christiaan Virant responded to something I’d mentioned at the close of my piece. After three sequential versions of the Buddha Machine containing FM3’s loops, I’d requested that a future edition allow for a user’s own audio. Virant and his FM3 partner, Zhang Jian, are the developers of the Buddha Machine series of small, portable, ambient looping devices.

Regarding Marc’s wish for a 4G buddha with upload capability… not likely in the Buddha Machine series, but am currently onworking a new device which might possibly allow user loops. its a different form factor than the buddha, but still a hand-held, self-contained music playback unit. in a retro-vibe… also, have been working for at least 3 years on a solar-powered buddha, but thwarted by high cost and low power output of smaller solar panels. recently solved the power problem however, so next gen buddha likely sun powered.

For more information on the machines, here are two interviews I’ve done previously with Virant: back in 2005, regarding their initial device (“Buddha in the Machine”), and in 2008, for the launch of the second edition (“Buddha Machine, Reloaded”).