The Eerie Return of the Wax Cylinder

And yet the further ahead we proceed, the further back we look. Which brings us to the cutting edge of ancient: wax-cylinder retro-fetishism. 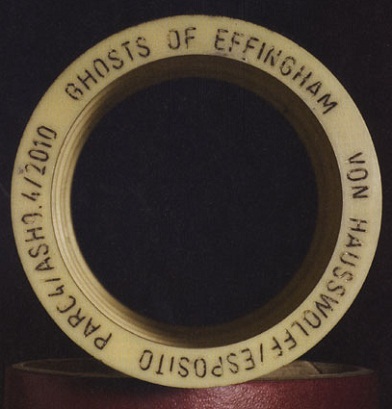 The wax cylinder was developed as a medium for recorded sound by Thomas Edison in the mid-to-late 1870s. By the time the Depression came around, Edison had stopped producing them.

And then, as 2010 was coming to a close, the duo of Carl Michael von Hausswolff and Michael Esposito released a brand new wax cylinder, titled The Ghosts of Effingham (shown above). And it glows in the dark. And it is purported to contain the voices of the dead.

That’s the subject of my latest guestblog entry at boingboong.net: “Wax Cylinder: Occult Sonic Technology of a Bygone Age, Good as New.”

(Above image is a detail of a shot displayed at the touchmusic.org.uk website. It accompanies an extended article by Ken Hollings on Effingham and the occult origins of recorded sound in the January 2011 issue of The Wire. More from Hollings at kenhollings.blogspot.com.)