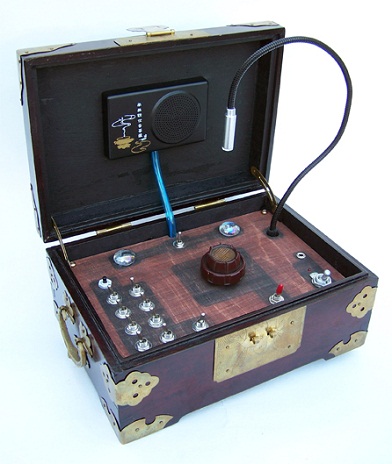 As mentioned previously, one of the great things about guestblogging this past couple weeks at boingboing.net has been the audience. You never know who’s going to drop by the comments to add something valuable. For example, Christiaan Virant, one of the two creators (aka the duo FM3) of the Buddha Machine, left word of plans for a device that would allow original audio by users (in contrast with the preset loops that come in the first three editions of the Buddha Machine). And two musicians left links to MP3s of their related recordings.

And also in that same post’s comments was one from Univac. A little background: for the very first Maker Faire, held in April 2006 here in the San Francisco Bay area, I put together a panel discussion and performance about and by musicians who make their own instruments. Participating were Krys Bobrowski, Chachi Jones (aka Donald Bell, now a writer at CNet), and univac (aka Tom Koch). You can check out the audio of the panel here: “Maker Faire Instrument Panel MP3.” There’s a conversation, which I moderated, followed by a group improvisation.

Back to the Boing Boing post: Univac was sharing information about one of his many hacked sound makers, in this case a traditional Buddhist chant box, or buddha machine (lower case), that he’d gotten from a Los Angeles temple (given to him by Negativland colleague Tim Maloney). His device is shown above, and here are three samples of its audio: there’s one of a chant, first in its normal state, and then slowed down (MP3); then comes one that results from the use of that snakelite LED as an optical control (MP3); and then there’s an extended noisy run through the gadget’s many switches (MP3). As univac puts it: “A nice long noisy journey thru the switch matrix. Turn down the lights. Hide the cats. Don’t call your girlfriend.”

If you’re familiar with the FM3 Buddha Machine, then you will recognize the (non-FM3) chant device attached on the inside of the cover, above. 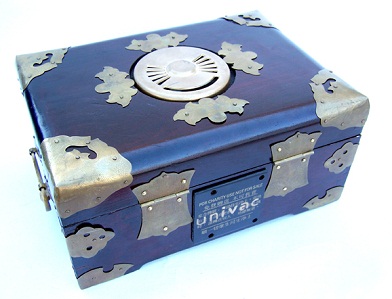 The gadget is called the Chanter. More on it at techdweeb.com.