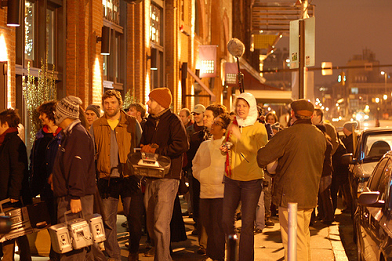 It was Unsilent Night two nights ago in Dallas, Texas, and in Charleston, South Carolina, as well as in San Francisco, where I live, and in lower Manhattan, where Unsilent Night was created by composer Phil Kline in 1992.

The night prior it was in Asheville, North Carolina, and the night after it hit Salt Lake City plus three spots up the West Coast: San Diego, Los Angeles, and Vancouver. Tonight, December 20, it starts in Cambridge (the one in Ontario). And those are just a few of the many instances of Unsilent Night this year. Last year it hit London for the first time, this year Hong Kong.

Unsilent Night is a non-denominational ambient caroling event, no singing required. You download one of a handful of tracks from the Unsilent Night website (unsilentnight.com) or Facebook page (facebook.com/unsilentnight), and show up at the appointed spot at the appointed hour. From there, however many dozen or hundred participants will click play at more or less the same moment, and walk along a pre-determined route. The one in New York goes from Washington Square Park to Tompkins Square. In San Francisco every year it starts and ends at Mission Dolores Park. The tracks are not all exactly the same, and in addition to the way their sound complements each other, you have the slight variation in reproduction quality and time-sync from all those boomboxes. The result, chaotic as that might suggest, is a glistening holiday treat.

I’ve attended many times (while looking for Creative Commons images to accompany this article, I stumbled on several candid photos on Flickr.com in which I was prominently featured), and have joked/planned with one friend for some time that we would walk it backwards. I’ve also intended to stay put and listen to it pass. Last night ended up being appropriate for the latter. I staked out the path from a second story apartment, and put a digital recorder on the window sill. This is the result:

This is not the full piece. It began several blocks away prior to when the recording begins, and ended many more blocks after it passes. It seemed like the smallest showing for Unsilent Night that I’ve ever witnessed, perhaps owing to the cold weather, and thus the crowd was sparse and the line relatively brief. In other years, the gathering boombox-holders (and people who love them) have filled the street as they made their way. Last night, they walked two at a time down the sidewalk.

Still, the recording is a good representation of the sonic experience, the way the sounds interact, the way street noise and camaraderie add further elements of chance sound, and the way the built environment shapes the overall aural experience.

For historical context, here’s a good piece by Kyle Gann from 1998 that considers Kline’s work in the broader context of what he, and others, called “downtown” music, referring to the music of Lower Manhattan:

And so the Downtown composer is attracted to media and materials that don’t carry a strong sense of tradition. Phil Kline makes music for an array of ghetto blasters. David Weinstein’s Impossible Music orchestra performs on hot-wired CD players. Many of the best Downtowners are pioneers in sampling, using bits of other recordings to make their own music. Or else Downtowners borrow rhythms and instruments from other cultures, combining elements into new hybrid musics. Downtowners do not feel that the meaning of a piece of music can be entirely captured by notation, and they often develop pieces in rehearsal rather than by trying to notate every nuance for an ensemble of complete and possibly unsympathetic strangers.

Full piece at kylegann.com. Unsilent Night has become such a phenomenon, it’s helpful to understand from whence it came, the group of composers out of which Kline arose, and the community in which his music first took root. The work’s blossoming in some ways is reminiscent of other ’80s and early-’90s New York City projects like William Wegman’s dog photos and the Blue Men Group, one-time art-world peculiarities that went from modest pursuits to global perennials. Wherever in the world Unsilent Night happens this time each year, its boombox-wielding participants are briefly transported to lower Manhattan in spirit.

(Above photo courtesy of the Commons at flickr.com.)