While visiting the Adamson House on the Malibu coast during a recent trip to Los Angeles, I saw the following sign: 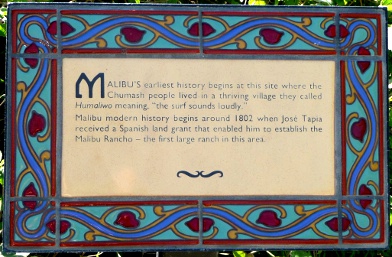 Surf Music: A sign at the Adamson House in Malibu, California

The Adamson House, a small compound really, dates from 1929, when its construction began. The sign, part of the site’s historical tour, reads, in part:

the Chumash people lived in a thriving village they called Humaliwo meaning, “the surf sounds loudly.”

The name Malibu is a reduction of “Humaliwo,” and thus the place takes its name from the sound of the surf — not so much the sound, but the volume of the sound. Today, depending on where you stand, you can’t really hear the surf, due to the sound of the road: the Pacific Coast Highway, this stretch of which, ironically, was initially named Roosevelt Highway, after America’s great naturalist president.

More on the Humaliwo at parks.ca.gov. In The Chumash World at European Contact (University of California Press, 2008), author Lynn H. Gamble links the translation to Chester King (books.google.com). More on Adamson House at adamsonhouse.org.