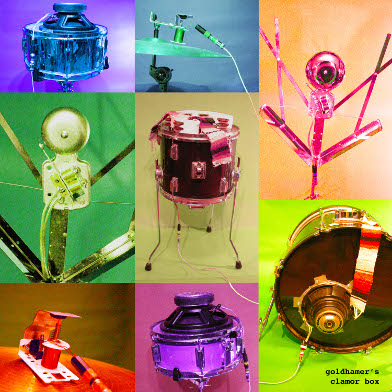 I interviewed the festival’s creative director, Kate Lesta, for the Colorado Springs Independent (“Ghost in the Machine”), and she talked about the fest’s roots in woodland rave culture and its aspirations for a permanent artist-residence space in the city:

“Ultimately what we are doing is exposing something to people who would never find it on their own, because the culture here is not urban culture, not about technology.”

I also spoke with sound artist Radere (aka Carl Ritger), who flies in from Philadelphia for the event. And the festival isn’t just about concerts — there is film, art exhibits and installations, and discussions, too. One highlight I didn’t have room for in the story is Laura Goldhamer‘s inventive speaker drum, the “Clamor Box,” which is shown up top.

More on Communikey at communikey.us, and read the full piece at csindy.com. The fest runs through Sunday, April 17.

One thought on “Communikey Starts Today in Boulder, CO”