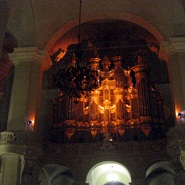 Drone music may have its greatest progenitor in the pipe organ, and Arturas BumÅ¡teinas explores that lineage in “Shadow (of Shadows).” Recorded in late 2010 in Warsaw, Poland, at St. John’s Cathedral in a performance by organist Algirdas Biveinis, the work is a slow build of extended tones. It is as much an experiment, however, in spatial recording as it is in slomo drone rock. The end result is a mixdown of multi-channel recording, including one external to the cathedral. “The piece,” we’re told, “was recorded with several portable recorders placed around the area of church, one extra microphone was placed outside the church to record the sounds of crows flying above the roofs.” One would hope that outside device also captured the muffled sound of the organ as heard through the church’s dense walls (MP3).

Layered in during post-production are bits of human speech, a “random female voice fragment” from YouTube, and Alfred Lord Tennyson’s “Charge of the Light Brigade.”There’s also what appears, at about the half-hour mark, the sudden intrusion of what may be a tourist’s voice. The real ghost, however, may be of the political variety. Apparently the origin of the composition is as “a harmonic analysis of Soviet Lithuania’s (1940-1990) anthem.” Hence the work’s title; a brief liner note likens the piece to “a shadow of another shadow.”

Track originally posted as part of the CrÃ³nicaster series at cronicaelectronica.org.

It’s worth noting that the previous entry in the CrÃ³nicaster series, this one by Luis Marte, was also recorded in a cathedral.

One thought on “Church Organ as Drone Progenitor (MP3)”