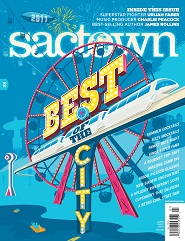 I wrote three pieces that appear in the current issue of the magazine Sactown: two brief entries in its annual best-of-the-city coverage, as well as a lengthy interview with producer/musician Charlie Peacock. Peacock is best known as a figure from the Nashville-centric world of contemporary Christian music, but he got his start in Sacramento bands that channeled electric-era Miles Davis, and he’s brought musicians like John Zorn associates Joey Baron and Marc Ribot, as well as John and Alice Coltrane’s son, Ravi, aboard for his two most recent solo albums, Love Press Ex-Curio and Arc of the Circle. Peacock’s story is a fairly intense one, not that you’d know if from his amiable demeanor. By the time the 1980s got underway, he had overcome a severe addiction to drugs and alcohol, which went hand in hand with his religious conversion. That conversion delivered him a new audience, and in time that audience delivered him to Nashville. Eventually, he came to question the orthodoxy, religious and aesthetic, that ruled the scene he had entered, to the extent that he even wrote a book about its inherent contradictions.

Peacock is a great conversationalist, and the discussion he and I had — as well as the many emails we traded subsequent to our talk — made it clear the extent to which his critique of the self-containment, the self-ghetto-ization, of “contemporary Christian music” stems in large part from his admirable abhorrence of the whole concept of “genre.” In other words, issues with spiritual orthodoxy run side by side with issues of stylistic orthodoxy. It’s a heady parallel, to say the least. And the genre matter alone has applications far beyond country and pop music.

This tidbit didn’t make the final cut of the story: Peacock, whose most recent hit is the deeply sublimated folk-country of Civil Wars’ Barton Hollow, told me that the ambient bed of that album involved playing the Yamaha DX-7, Brian Eno’s favorite synthesizer, through an Echoplex tape delay. (Researching stories such as this can take you down unexpected paths — should take you down unexpected paths — and I ended up writing a separate, brief piece about the Denver-based rock band the Fray for its local alternative weekly, csindy.com, after Peacock introduced me to Fray singer Isaac Slade. Aside from touching on the orthodoxy matters, the Fray piece is pretty far afield from standard Disquiet.com coverage, but I include mention of it here out of thoroughness. The Sactown article is not online, but the Colorado Springs Independent one is.)

Also in the Sactown issue: I had the opportunity to praise the long-running Sacramento comics store World’s Best Comics, founded and run by Dave Downey (no relation to Iron Man Robert Downey, Jr., but long ago a member of the band Pounded Clown), which was the first store to ever sell mini-comics by Adrian Tomine (whose work I edited in the music magazine Pulse!, beginning when he was in high school, and who graciously provided a quote about Downey for the article).

And I wrote up the excellent podcast Phoning It In (based at phoningitin.net), which features live performances by musical acts who (you guessed it) play via a phone line. Host Elisa Hough (who runs the show from KDVS 90.3 FM, Davis, California, where I was a DJ many years back) answered some questions for the piece, and shared the following technical advice: “I try to tell artists it definitely has to be a landline with a cord. Cordless phones pick up interference. I’ve never even experimented with cellphones. That’s a no-no.”Phoning It In episodes have been occasional subjects of this site’s Downstream department.

More on Sactown at sactownmag.com.