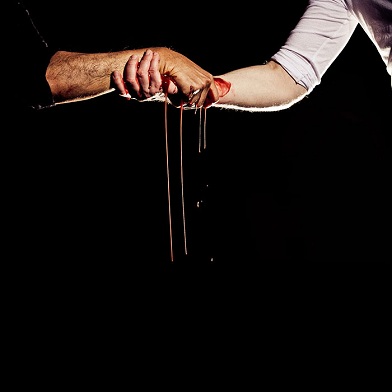 The remix takes many forms. Music is remixed, but so too are videos, photographs, words, recipes, buildings, ideas. The remix is a means by which the past is made vibrant. It is the means by which the certitude of any form of documentation is probed and prodded until it loses its illusion of integrity.

Maximilian I was emperor of Mexico for three years, from 1864 through 1867, a little longer than John F. Kennedy was president. Like Kennedy, Maximilian died a public death in broad daylight — by execution, not assassination — and like Kennedy’s his death, despite its public nature, yielded countless contradictory retellings. Numerous claims have been made that Maximilian wasn’t actually killed at all. The individual stories range from mundane to fascinating. The collected stories take on a truly kaleidoscopic appeal, for disorientation is the end result of the conspiracy theory, sometimes intentionally so.

I was asked to ponder the death, the deaths, of Maximilian for A Sors, a project developed by artists Julio César Morales and Max La RiviÃ¨re-Hedrick, with Norma Listman, for the Warhol Initiative. Julio and Max have described A Sors as “a meal-as-art-project.” In more detail: “A Sors investigates Maximilian’s brief, tragic rule of Mexico, from 1864 to 1867, through the vantage of his most intimate and trusting relationship: the one with his imperial chef and confidant, a Hungarian known as Tudos.” The event was held for guests of a Warhol Initiative conference last Friday, June 24, in the Regency, a former Masonic lodge on Van Ness Avenue in San Francisco.

For my part, I was asked to contribute some posts to the A Sors work blog, to tease out themes from the performance, and perhaps in the process help add to the mythology. The myth that A Sors takes as its basis is that Maximilian asks Tudos, the chef, to kill him. My efforts took the form of two short stories. I’m very happy with how they turned out. I write a lot of fiction, though I rarely share it with anyone. The two short stories are titled “Burying the Goat” and “A Change of Seasons,” and they’re both online at Max’s engine43.org website.

“Burying the Goat” focuses on the Masons, who are often associated with variations on Maximilian’s fate. I was trying, in the piece, to simultaneously add to and subtract from the Masonic legends by writing one more version, one that in turn provides an explanation for all the different stories that follow Maximilian in his fabled escape. The tone I was working toward was something along the lines of “H.P. Lovecraft minus the spiritualism.” It begins a year into Maximilian’s reign:

The Masons love their games, their plots, their symbols, their puzzles. History is itself a kind of puzzle, though two years ago Esteban Herrera did not know this. …

“A Change of Seasons” was an attempt to consider the events that history doesn’t record. In this case, that blank space is the dark carriage in which Maximilian rides from his prison cell to the hill where his executioners wait. The piece can stand alone, but also works to undermine the presumption of authority that hovers over the Masons’ secret meetings. It begins as dawn breaks on the day that Maximilian is due to die:

It is June 19, 1867. Summer has begun. With the change of seasons, the days will begin to get shorter as well as warmer. There is work to be done. There are fields to be tended, but today is a holiday. To the Catholics of Querétaro, Mexico, it is a religious festival, the FÃªte-Dieu. In a few hours, the date will become associated with another, more sorrowful occasion. …

I’ve served as managing editor on the A Sors project as well, and it’s been a great pleasure. Thanks to Max and Julio for the invitation, Norma for the food, and everyone else for the collaborative experience. More on the Warhol Initiative and A Sors at warholinitiative.org.

(Above photo for A Sors by Andria Lo, of andrialo.com; design by Brian Scott/Boon, of boondesign.com.)