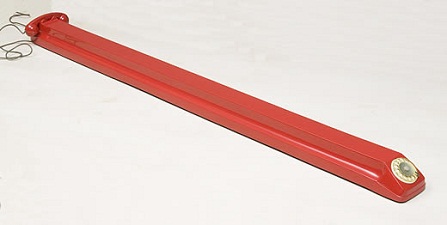 The recent exhibition of contemporary art from India at the San Jose Museum of Art — Roots in the Air, Branches Below — had numerous and welcome splashes of color and whimsy. 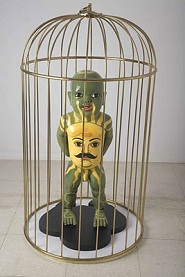 Key among them was Chintan Upadhyay‘s “Untitled (Designer Baby) (2008),” a painted doll caged like a songbird (pictured at left), its mouth open, though perhaps more likely to bite than to sing. The figure painted on its chest could just as easily be meant to imply that it has been consumed, rather than tattooed — which is to say, rendered mute. Also making an indelible impression was Aparna Rao and Soren Pors‘ “The Uncle Phone” (2004), a red rotary-dial device extended to an almost absurd 78 inches (shown up top). Despite the phone’s relative antiquity and seeming ineffectiveness, it is not a comment on the long-distance relations of tech workers; according to the artists, it takes its inspiration from an uncle who preferred someone else dial the phone for him. So, come to think of it, maybe the long red phone is about a communication disconnect, but that would be one of age and class, not of physical distance.

The most cacophonous piece in the show buried its visual noise in a field of apparent white noise, a loose haze gathered around a central, colorful figure. The work is “Sink” by Dhruvi Acharya, and it dates from 2007: 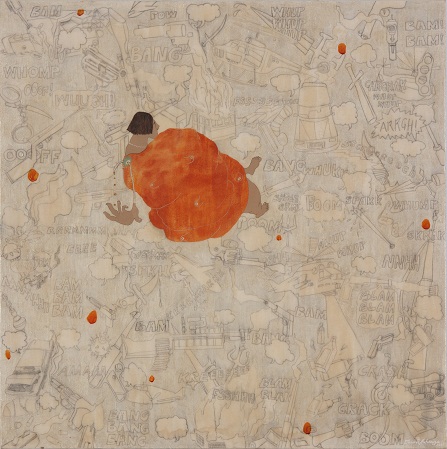 As the five details below show, that haze around the central figure is, in fact, a warzone. Images of violence — archaic weaponry, car wrecks, bombs — are accompanied by the cartoon onomatopoeia of their associated sounds: “bang,” “blam blam blam,” “fsssssshhh,” and so forth. 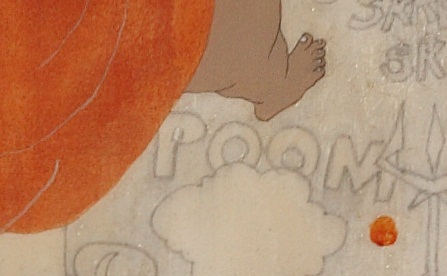 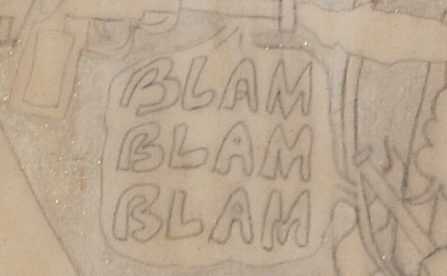 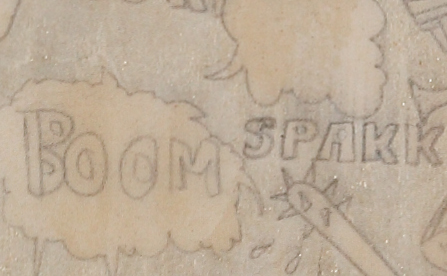 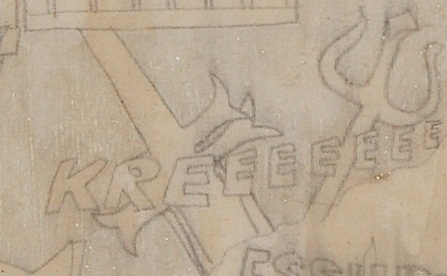 Many of the sounds are drawn from familiar comic-book norms, but also there are more improvisatory effects like “spakk” and “poom” and “nnhh” and a “kreeeeee” with almost too many vowels to count. It’s worth noting that for all the war-like imagery, the message of the piece is said to be as environmental as it is pacifist, and Shiva’s trident links the contemporary concerns to Indian myth. 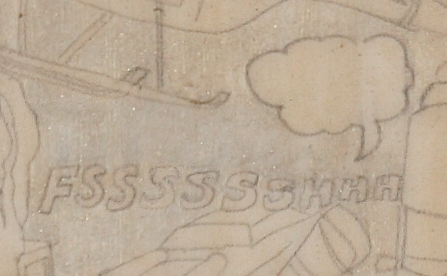 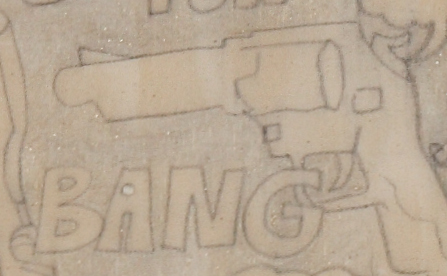 The line work of the figures (helicopters and guns, for example) is, by and large, indistinguishable from that of the sound effects. This renders them equal on the page, serving both to elevate the prominence of the sounds, but also to usher the collective drawings into the background, a fatalistic statement about the ubiquity of violence if ever there were one.