Dark Side of a Pixel Moon

An essay to accompany the work Blackwork by Paolo Salvagione 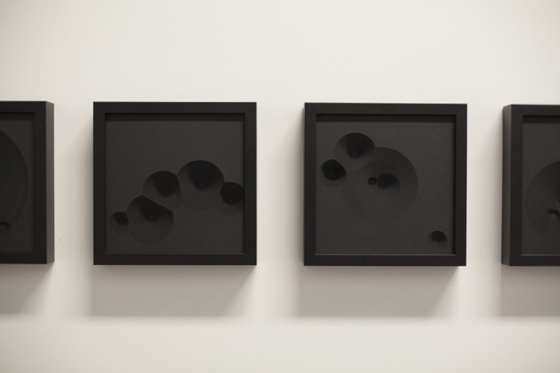 The artist Paolo Salvagione, whom I have assisted on a variety of projects this past year, has an exhibit opening this evening in Oakland, California, at the gallery Aggregate Space (aggregatespace.com), as part of the Art Murmur event (oaklandartmurmur.org). His Missing Window installation (shown at the bottom of this post) will be on view, as will a new series of works collectively titled Blackwork. I wrote an essay for Blackwork, as I have for other recent Salvagione projects.

Up top are examples of Blackwork, in which voids are cut with lasers into blocks of thick paper, according to patterns developed in CAD software. 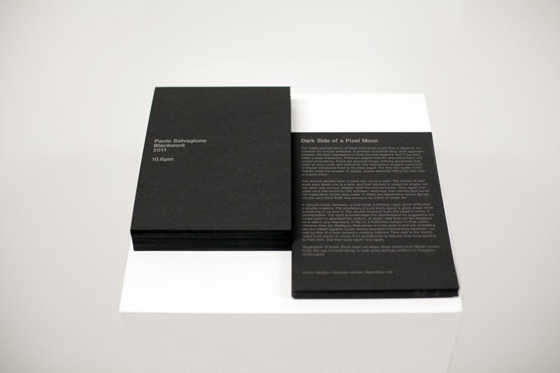 Shown above is the printed essay, as designed by our friend Brian Scott of Boon Design (boondesign.com). The “10.6Î¼m” on the front of the piece refers to the wavelength of the laser that cut the paper.

And this is the text of the essay:

“Dark Side of a Pixel Moon”

The tightly packed layers of black card stock could, from a distance, be mistaken for sample swatches, or perhaps acoustical tiling. Upon approach, however, the deep impressions in them become apparent, and in turn they make a deep impression. There are angular indents, and sharp holes, and conical excavations. These are quizzical things, enticing geometries that seem at once iconic and whimsical. The impressions suggest some form of impact introduced them to the thick paper. The step-like quality of the indents imply the ravages of motion, arcade asteroids hitting the dark side of a pixel moon.

The various cavities were, it turns out, cut by a laser. The sheets of card stock were sliced one at a time, and then stacked to reveal the shapes — not the other way around, despite what the eye perceives. Then again, the paths were first traced in CAD software — sketched, then refined, then turned into instructions for the laser-cutter. In effect, the hypothetical space, though not the card stock itself, was stamped by a kind of virtual die.

A vacuum inside darkness, a void inside a shadow — each piece embodies a double negative. The emptiness of pure black space is given shape when something is cut from it. This double inversion fuels the viewer’s sense of disorientation. The artist acknowledges the disorientation by suggesting the works have no specified top, bottom, or sides — that they can be displayed on a wall in any alignment, or flat on a horizontal surface for that matter. However they are displayed, their sense of scale goes in and out, undulating like the naked speaker cones whose tar-paper material they resemble — as well as that of a field camera’s crinkling bellows. They veer in the mind’s retina from macro to micro, from architectural to textural, from lunar landing to Petri dish, and then back again, and again.

Regardless of scale, these laser-cut steps, these playful 8-bit Bezier curves, invite the eye to travel along, to walk amid geologic artifacts in imaginary landscapes. Here are two previous essays I wrote to accompany work by Salvagione: “Where the Sky Begins” and “Addressing the Competition.” I also served as Euphonic Coordinator (i.e., Music Supervisor) for a video documenting his exhibit “An excuse to respond.”

This is a photo of installation of Missing Window, which is also part of the Aggregate Space exhibit: 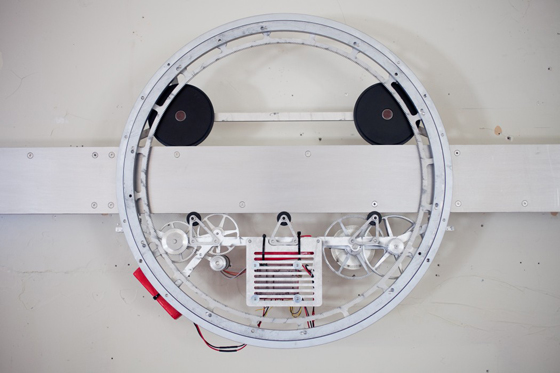 More on the exhibit via Salvagione’s facebook.com account. There will be a closing event on December 3. The Aggregate Space gallery is at 801 West Grand Avenue in Oakland, California. Its hours are Fridays from 5:00pm to 8:00pm and Saturdays from 1:00pm to 4:00pm.