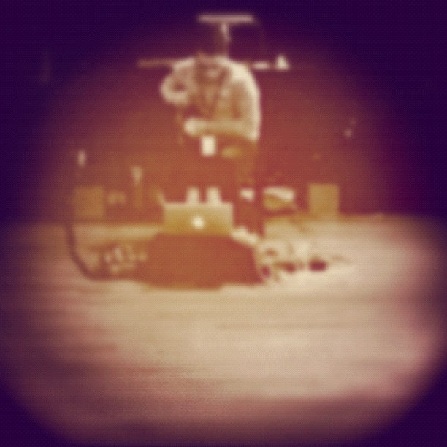 Over at percussionlab.com, Radere (aka Carl Ritger) posted a live set he performed at this year’s Communikey festival in Boulder, Colorado. Opening with shimmering guitar and cloud-break choral effects, the piece builds in density and intensity, as if the soft-focus sounds are slowly brought into stark relief, and their fractured surfaces are revealed for all their grizzled imperfection, and yet in turn those imperfections come to urge their own sense of wonder. In other words, it’s downright fractal.

I’d interviewed Ritger for a story about Communikey in advance of the festival (“Ghost in the Machine”), and was glad for the opportunity to, belatedly, hear his set. The brief descriptive note at Percussion Lab, and at Ritger’s soundcloud.com/radere account, note that he used “Guitar, pedals and laptop” and that he performed material from two of his releases, A Season in Decline and Lost at Sea, I’m Never Coming Back.

However, like as with any good music, repeated listens brought questions, and so I asked Ritger to discuss the performance a little more thoroughly.

Marc Weidenbaum: What was the equipment you used?

Carl Ritger: The primary element in all of my performances is the guitar, which I run through a constantly evolving array of pedals and processing stages. This particular set was one of my last using my laptop as a processing tool, actually. I had my guitar patched into a preamp, an overdrive, and a variety of delay pedals before hitting the soundcard. From there, the signal went through a bunch of granular effects and things of that nature, resulting in the swelling drones that you hear in the recording. The laptop was also running a few layers of field recordings and textural elements, which were culled from several releases, including stuff I’ve done for the labels Full Spectrum and Basic_Sounds.

Weidenbaum: What was the performance space?

Ritger: I performed at the Communikey headquarters during the festival, which was located in the Boulder Museum of Contemporary Art. It was a beautiful space with nice hardwood floors and plenty of natural light. Plus, a bunch of my friends from around the country were in the audience, including some I hadn’t seen in years. It was a really nice vibe.

Weidenbaum: What was your aesthetic goal?

Ritger: A lot of that material was produced during a pretty weird period in my life. I was pretty isolated, so I found my aesthetic shifting from quieter, minimalist place to a louder, slightly more abrasive sound. I guess in a sense, working with distortion and feedback more deeply provided a level of catharsis that more subtle forms couldn’t provide me with. The core of what I’ve always been interested in — signal processing, drones, minimalism — was still intact, but the volume was always inching upwards. I actually played a show out here in Boulder shortly after my relocation and the promoter was worried they were going to get their first noise complaint! I would never have imagined being faced with that sort of situation during a performance even just a year ago.

One thought on “Radere Live in Boulder (MP3)”